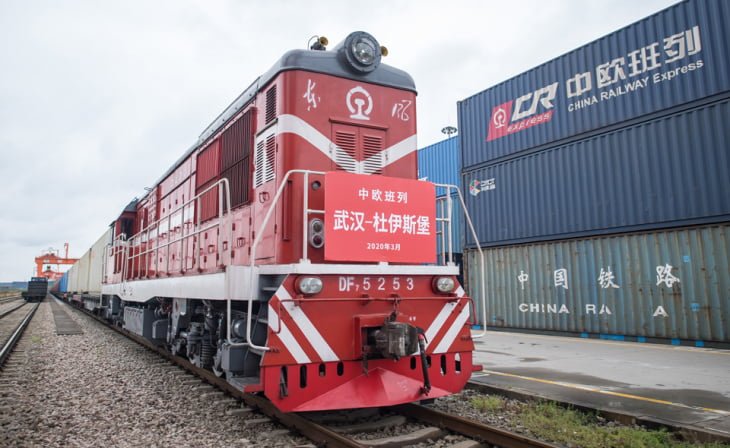 The global pandemic has become a kind of litmus test demonstrating the need for accelerated development of transport communications and, above all, new railway routes, writes Podrobno.uz. Experts predict that after the economic recovery from the pandemic, freight train traffic will only grow and the construction of a China-Kyrgyzstan-Uzbekistan railway is becoming urgent.

Foundation for the Future

In 2013, a megaproject was launched in Uzbekistan with participation from Chinese partners for the construction of an electrified railway line “Angren-Pap” consisting of a 19-kilometer tunnel carved through the Kamchik pass. Well-known Chinese company China Railway Tunnel Group acted as a partner of Uzbekistan.

The opening of the rail line took place in June 2016. During its first year of operation, approximately 10 million tons of cargo and 600,000 passengers were transported. The total project cost exceeded $1.6 billion.

Currently, the shortest transport routes from China to Europe and the Middle East lead through Russia and Central Asia. Over the past few years, there has been a tendency for the growth of freight traffic by rail from China to Kazakhstan, Russia, Europe, Central Asian countries, and the Persian Gulf. The volume of railway traffic through two crossings on the Kazakh-Chinese border in 2018 amounted to about 14 million tons and increased by 38%.

Container traffic from China to Europe increased more than 40 times last year compared to 2010. However, only one percent is transported by rail and the remaining 99 percent by sea. Hence, the new Uzbekistan-Kyrgyzstan-China railway is intended to become an important link in the regional transport network within the East-West project, which, along with the North-South subregional corridor, will provide all countries in close proximity to Central Asia with access to markets in Europe, East and Southeast Asia, the Middle East and to ports in the Mediterranean.

The Chinese partners consider the railway project beneficial for all its participants since it will be able to increase the flow of goods and trade between the countries of the region and strengthen economic cooperation in general.

Project negotiations are currently underway between China, Kyrgyzstan, Uzbekistan, and now Russia in the “3+12” format. The parties have prepared three main possible options for the railroad between the countries. Now the parties need to agree on technical details.

Read also: Uzbekistan will be able to transport goods through the seaports of Pakistan

Experts are confident that this new railway can become the most important transit corridor resulting from China’s Belt and Road Initiative. Its implementation will significantly improve the transit potential of the entire region bridging Europe with Asia.

Russia’s interest in the project is explained by the fact that it views the future railroad not only as a transit corridor but also as a tool for the development of the EAEU. According to the Eurasian Economic Commission, the countries of the association will be able to significantly increase the production of agricultural products if they can supply it to the Chinese market via the railway network.

Indeed, the project to transport agricultural products to China has enormous potential. The countries of Central Asia are significant players in the global agricultural market. In addition, they have significant opportunities for the production and export of meat, dairy, and food products.

In addition, the new transit corridor will allow China to reduce the delivery time of goods to Europe by 7-8 days according to experts. Central Asia, in turn, would benefit from the fact that it could develop trade and reduce the cost of imported goods. For example, the use of the transit corridor for just the transit of goods can annually bring about $200 million directly to Uzbekistan.

The volume of cargo transported along the projected line can reach 15 million tons per year. In the first stage, it will account for over 10% of the cargo flow to Iran, the Middle East, and Southern Europe according to expert estimates.