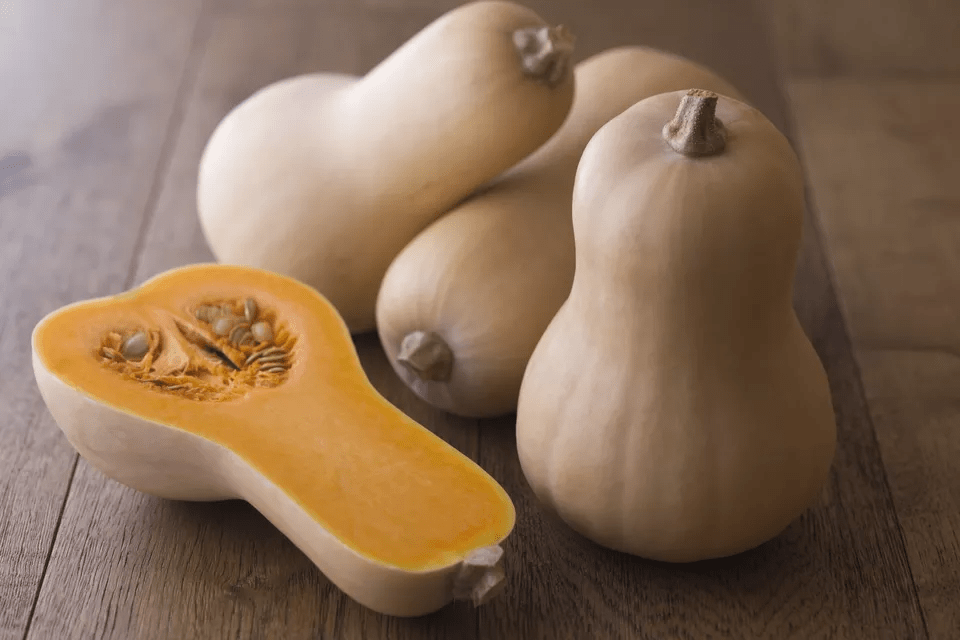 Ukraine has found an attractive export niche, which has been actively developing for several years – fresh butternut squash exports. Moreover, Ukraine supplies it mainly to the most demanding of the possible sales markets – the UK.

Last year, Great Britain imported about half of all Ukrainian butternut squash exported – 972 tons. Exports to this country increased by 20% per year in volume and even more significantly in value terms since average butternut squash prices have increased. Considering that the UK imports more than 70,000 tons of butternut squash per year, Ukraine is far from having exhausted all the possibilities of supplying these vegetables to the United Kingdom because the share of Ukraine in British pumpkin imports barely exceeds 1%.

Interestingly, butternut squash supplies from Ukraine are not limited to the UK. Ukrainian exporters are actively diversifying their sales. In 2020, Ukraine more than quadrupled the exports of fresh squash to Romania. Thus, in 2020 Romania accounted for more than 31% of all Ukrainian butternut squash exports, while a year earlier – only slightly less than 13%.

Another interesting precedent was the supply of Ukrainian butternut squash to the UAE in 2020. It was the first large batch of fresh squash delivered to the Middle East from Ukraine. And this gives hope for the further expansion of sales markets because other fruits and vegetables are increasingly being exported in this direction, mostly thanks to FAO and the EBRD’s successful trade missions.

Similarly, the Ukrainian squash exports to Moldova and Bulgaria increased significantly, reaching 145 tons and 112 tons, respectively. Note that a year earlier, Moldova imported only 15 tons of this product, and Ukraine didn’t supply squash to Bulgaria at all. Among other vital directions of Ukrainian supplies, we note the Netherlands, where Ukraine exported 59 tons of the product. 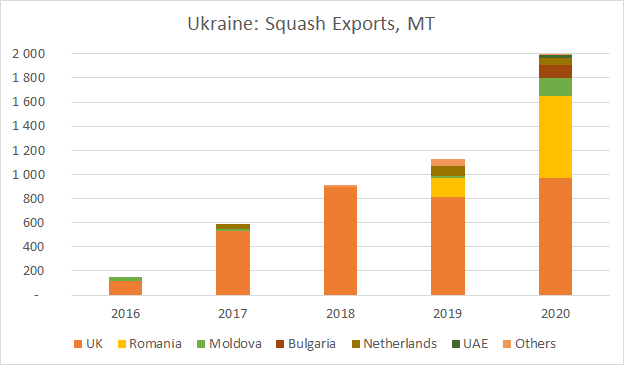 “Exports of squash from Ukraine began to actively develop in the country after the closure of the Russian market in 2015 when Ukrainian vegetable growers were forced to urgently seek both new supply channels and new products for exports. One of these turned out to be squash and in 2016 the first 117 tons of squash were delivered to the United Kingdom. Today, squash exports are one of the fastest-growing segments of Ukrainian export products with high-added value,” comments Yevhen Kuzin, the head of International Projects at Fruit-Inform.com.

“Buyers from the EU are selective about the quality of supplied products. Therefore, although the volumes of pumpkin imports from Ukraine are growing rapidly, they remain relatively low. Butternut squash, according to the requirements of the main European buyers, should be rather small and proportional and the optimal weight should be from 800 g to 1 kg. Squash over 1.5 kg are practically not used for direct sale in supermarkets and are mainly sent for further processing,” adds Mr Kuzin. 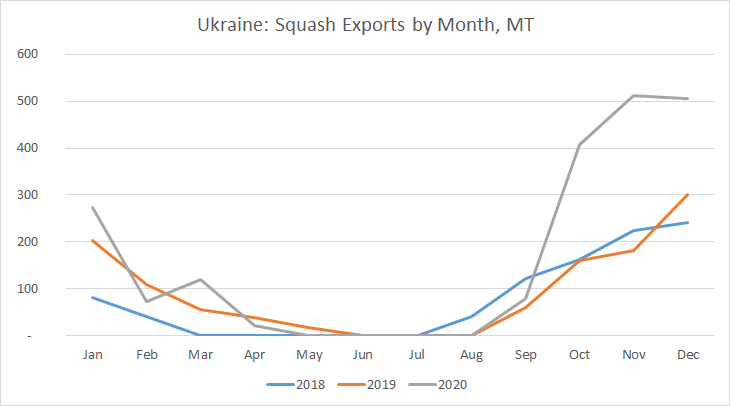 The main exports of butternut squash from Ukraine occurs in the autumn-winter period. The peak of export supplies falls in October, November and December, and since January, exports begin to decline.  From January to early March, butternut squash from the Southern Hemisphere countries (Brazil, South Africa, etc.) is already actively entering the EU market. It is then that supplies from Ukraine begin to decline. 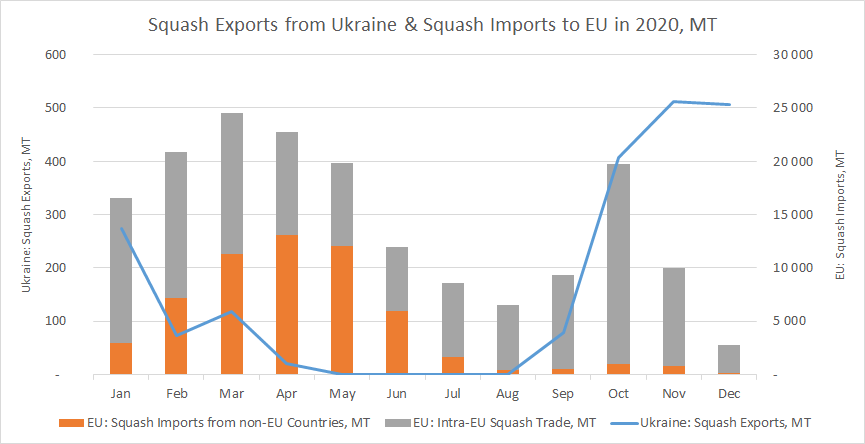 “Although Ukrainian exporters will traditionally export the main volume of butternut squash in September-December, they will pay more attention to lengthening the season of their supplies. It will make it possible to stay on the EU market until the end of spring next year when relatively expensive products from the Southern Hemisphere countries occupy the bulk of this market. Also, even in October-December, the growth potential of Ukrainian butternut squash supplies to the UK and EU countries, not to mention the Middle East markets, continues to be quite significant,” says Yevhen Kuzin. 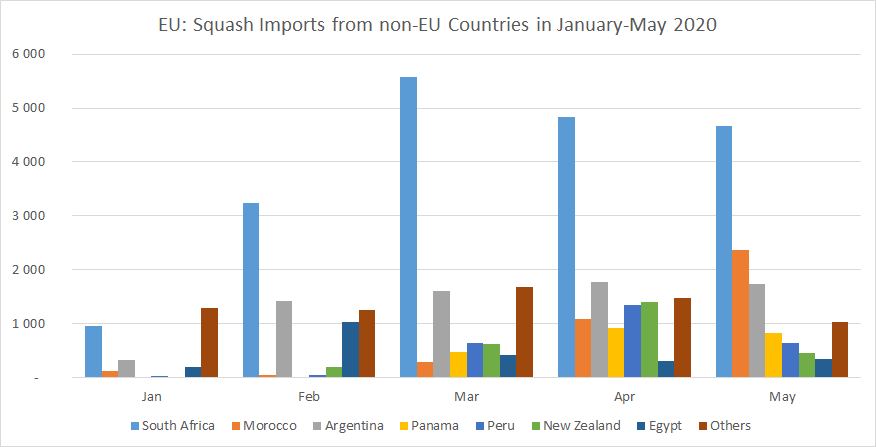 According to EastFruit, the main squash suppliers in January-May 2020 to the EU from non-EU countries and geographically the closest were Morocco and Egypt in Northern Africa. Other suppliers were from the Southern Hemisphere and Central America such as South Africa (the leader in deliveries), Argentina, Panama, Peru, and New Zealand.