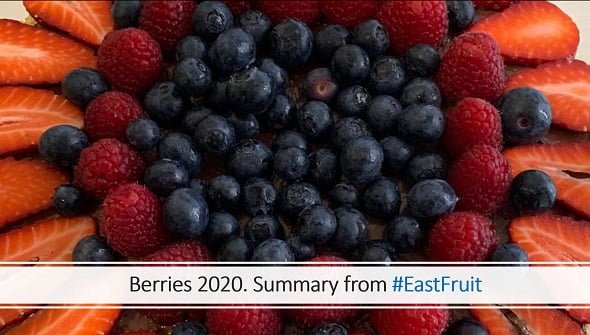 The EastFruit team reviewed the main events of 2020 and analyzed what impact they can have on the development of the berry business in 2021, both in a global and regional context.

Despite the coronavirus pandemic, declining incomes, and complicated logistics, the berry trade flourished in 2020. Caring about health and immunity, regardless of cost, has become the main reason for the sharp increase in the consumption of berries, which most people consider to be one of the most beneficial fruits for health.

The main global blueberry market development was the change of the world leader in terms of export volume, which became Peru. In 2020, according to EastFruit estimates, Peru will consolidate its leadership on the global throne of the world’s leading blueberry exporters continuing to grow exports faster than any other country in the world.

Given the trend of consumer interest in berries, which are viewed as superfoods, honeysuckle appears in a new even more positive light. Fans of haskap berries believe that it can even follow the success of blueberries in the global berry market, however, this obviously will take a lot of time and effort to improve its selection. There will be a need for milder varieties that are easier to harvest by hand with more predictable growing results while maintaining good palatability.

Returning to our region, we shall note the progress of Georgia about which we have written a lot! EastFruit estimated blueberry exports from Georgia at 630 tons, but the final figures were even higher with exports that amounted to about 665 tons or 3.4 times more than in 2019.

Ukraine, which until 2020 was among the world leaders in terms of growth in blueberry exports, has sharply surrendered its positions having reduced exports by more than one and a half times to 1,200 tons. The main reason for the decline in exports was the loss of crops from frosts, but the domestic market continued to grow. Therefore, Ukrainian berry farmers received higher prices for all types of berries. At the beginning of the season, blueberry prices were almost twice as high as in 2019. Poland also suffered from frosts and, according to our estimates, also reduced the volume of blueberry exports in physical terms, but very slightly. Yet, blueberry exports from Poland increased in terms of value.

The high prices have spurred interest in the establishment of new blueberry plantations in Ukraine, the area of ​​which may triple in the coming years. The technologies of growing blueberries in containers turned out to be especially interesting for Ukrainian farmers, but the climatic conditions of Ukraine made this technology risky in most regions.

APK-Inform: Vegetables and Fruits unique research study “Blueberry Market in Eastern Europe-2020” aroused great interest in the market showing a complete picture of varieties, areas, technologies, production volumes, exports, imports, etc., for Ukraine, Russia, and Belarus. The information is collected directly from almost all the leading producers of these countries, not from official statistics, and many of the study’s findings were a revelation for EastFruit analysts.

Prices for other types of berries in the region were also favourable in 2020. Frosts, for example, had completely redrawn the situation on the market of strawberries in Ukraine and Poland. Strawberry prices were high.

It is also worth mentioning the Ukrainian Horticulture Association (UHA), which is an important player for the berry business of Ukraine and has always placed great emphasis on promoting Ukrainian berry exports, has changed its leadership. One of the most famous berry growers in the region Taras Bashtannyk became the UHA President and the UHA Berry Committee was led by Yevhen Kharlan from iBerry. UHA plans to intensify work in the berry direction to stimulate investments in the berry business, promote cooperation of berry producers in exports and processing, and to raise the professional level of Ukrainian berry producers.

In Moldova, the berry business did not develop so actively. For example, industrial blueberry plantations in the country were literally “one, two, done” meaning only the second plantation appeared in 2020. A new incentive for the development of Moldova’s berry business will be the possibility of using underground wells for irrigating orchards, berry fields, and vineyards.

The bankruptcy of Vanrik Agro, the largest blueberry producer in Georgia, caused a violent international reaction, including and thanks to the neutral publications of EastFruit. Here are the stories in chronological order: bankruptcy auction, charges of one side, and charges of the other side. It looks like the 2020 season turned out to be successful for the new owner. Foresight Investment Group, which bought the assets of Vanrik Agro at the end of the season, promised to expand the plantation to 260 hectares.

Summing up the results of 2020 for the berry business, Andriy Yarmak, an economist of the Investment Centre at the Food and Agriculture Organization of the United Nations, draws attention to two aspects that are important for future development: cooperation and access to market and technological information.

“The berry business is developing very quickly and there are no eternal dogmas in it that cannot be refuted by scientific and technological progress. Since the berry business is now showing the fastest growth in the sector, it is the berry growers that attract the maximum investment in R&D, namely, in the automation of cultivation and harvesting technologies, selection and adaptation of varieties to new climatic zones, in improving their resistance to pests and diseases, increasing productivity, taste qualities, and transportability. Under these conditions, a successful berry business must have mandatory and constant access to technological and marketing innovations, which means that all company specialists must know English well. Also, they should closely monitor the market situation and at the same time use professional independent research, not free information from the network or the calculations of interested suppliers,” says Andriy Yarmak.

“It should also be noted that even the largest berry producers in our region are extremely small. After all, it is very important to be able to ship batches of 10 to 20 tons per day if we want to be export-oriented and competitive and there are practically no such manufacturers. Therefore, there is no alternative to cooperation even for large farmers growing berries. That is why we have been promoting improvements to Ukrainian legislation on cooperation for so long and persistently and we are glad that it was approved in 2020,” explains the FAO economist.

When talking about market priorities for berry exporters, the FAO expert advises separating frozen and fresh market. “Fresh berries, of course, are most profitable now to supply to the EU countries. Here, I believe that Ukraine and Moldova have the greatest unrealized opportunities in the cultivation and export of raspberries and blackberries, even if this requires making summer greenhouses. Of course, fresh blueberries will be the leading export position for fresh berries for Ukraine and Georgia. At the same time, Georgia will increasingly focus on Russia, although its market window is so attractive that even with the closure of the EU market, Georgian blueberries will remain competitive in the Ukrainian market, in the Middle East, and even in EU countries. Ukraine, most likely, will eventually be able to supply container shipments of blueberries by sea to the countries of the Middle East, reaching directly to large buyers and optimizing logistics, but this may not happen anytime soon. In the meantime, it is worth developing export by air to the countries of Southeast Asia and the Middle East in order to gain a foothold in these markets,” explains Mr. Yarmak.

“Frozen berries are still one of the most promising areas of market development. With global blueberry prices falling in the coming years, frozen blueberries will also become a common exports category. First of all, I would still pay attention to the countries of Southeast Asia where the segment of frozen berries has great prospects and the infrastructure, but it is completely undeveloped just because the majority of consumers do not know about the existence of frozen berries. Therefore, a relatively small investment in the development of this market can give excellent results for berry producers, especially for frozen raspberries from Ukraine, Serbia, Poland, and Bosnia and Herzegovina,” explains the FAO expert.

In general, according to EastFruit analysts, we can see a sharp increase in the supply of many types of berries on the market in 2021 if there are no natural disasters. First of all, when talking about blueberries, the production of which in Spain, for example, may turn out to be 50% higher than last year. Ukraine may even double production in 2021. Therefore, the likelihood that prices for most types of berries will be lower than last season remains very high. Also, much will depend on the situation regarding the coronavirus pandemic, which is still a long road ahead.