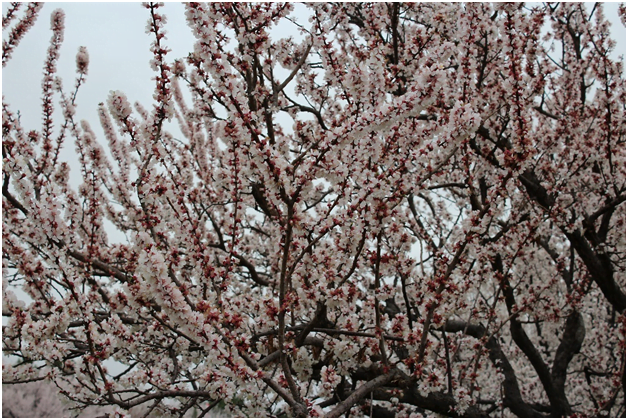 After an unseasonably warm February, two days of frost last week covered almost all of Tajikistan seriously alarming the country’s farmers. They are concerned about the fate of the future harvest of vegetables and fruits.

Senior Researcher of the Sughd Branch of the Institute of Horticulture, Viticulture and Vegetable Growing at the Academy of Agricultural Sciences in Tajikistan Juraboy Yangiboev shared his opinion on this matter with EastFruit:

“In the orchards of our institute, starting from January 12, we began monitoring the development of apricot buds. Apricot trees came out of the period of forced dormancy and the process of bud swelling began. February was warm and at an air temperature of +5°C. The apricot began to develop by February 24th and apricot flowering began on the southern slopes of certain regions.

In our region in the Khojibakirgan massif located at 450 meters above sea level, the temperature dropped from -7 to -10°C. But in our orchards, the flowering period has not yet begun; the buds are in a period of massive swelling. That is why no damage has been noted so far. However, the picture will be completely clear in 2-3 days.

During mass flowering, and I repeat that it came on some southern slopes, even a temperature of -2°C is harmful. In this case, the yield loss can even be up to 80%.”

Juraboy Yangiboev also clarified there is zonal farming in Tajikistan. In the greater territory of Isfara and Kanibadam where many apricot plantations are located, the buds are not yet swollen so it is possible that the losses here from the cold snap will be minimal. However, in the valley of Babadjan in the Gafurov region and in individual orchards of the Asht region, up to 20-30% of the orchards managed to enter the flowering period and, unfortunately, the losses will be higher.

“We are not talking about a complete loss of the future harvest in any of the regions since trees have an instinct for self-preservation. The flowering process for trees takes place in stages with 20-30% of the buds blooming first and then gradually the rest. In addition, the Atlantic cyclone that brought cold weather had an undulating character. Therefore, its negative impact will be felt in different ways in different areas of even one region. But, unfortunately, whether we like it or not, the apricot harvest this year will, unfortunately, be less than in 2020,” the scientist summed up.

Ilkhom Khakimov, a farm manager from the Gissar region, notes that the cold caused some damage to the apricot trees, but they benefited the apple, cherry, plum, and peach orchards of the region on the trees of which buds have just begun to wake up. Low atmospheric temperatures will restrain their development and help protect themselves from the next natural disaster, which can happen more than once.

Mukim Ashurov, a farmer from Babajan in the Gafurov region, believes that in the current situation, farmers especially need support and attention from governmental, international, and banking structures. In his opinion, many farmers in one degree or another will still suffer certain losses and they will need help in the form of tax breaks and soft loans.

New onions, cabbage and cherries are the most exported produce items of Uzbekistan now