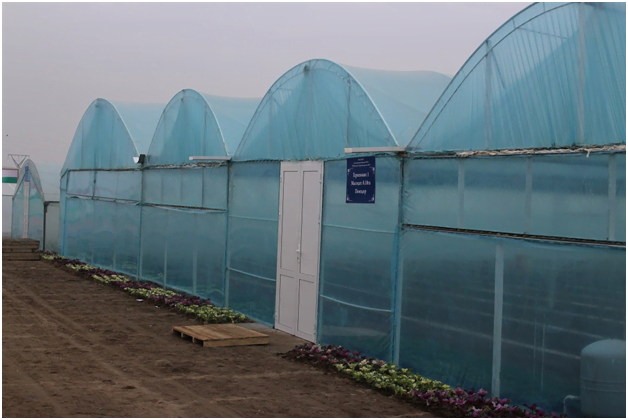 In 2021, 36 modern greenhouses will start operating in the Sughd region. Four of them have already begun to work at Saidkhoji Urunkhodzhaev Farm in Babajan Gafurov region. Farmers grow tomatoes, cucumbers, potatoes, and greens there. In total, the farm, which has 1,650 shareholders, now has 37 traditional greenhouses ranging in size from 4 to 16 acres.

Greenhouses allow farmers to gather three harvests a year. As a rule, in many greenhouses, farmers grow tomatoes first, collecting them already in the fourth month, and then, farmers plant cucumbers and other vegetables and herbs. Seedlings of tomatoes and other crops are grown right there in greenhouses. With these seedlings, farmers provide for their own needs and distribute the seedlings to many regions.

Farmers of the enterprise also grow potatoes on nine hectares in the open field, carrots on nine hectares, and turnips on one hectare. This year, the shareholders intend to increase the sown area for potatoes to 100 hectares for the first time.

The farm has 2,700 hectares of irrigated land at its disposal, some of which are occupied by apricot, apple, cherry, plum, persimmon, pomegranate orchards, and grows other various vegetable crops, as well as raw cotton.

As part of the implementation of the Agricultural Reform Program of the Republic of Tajikistan for 2012-2020, 459 small and large greenhouses of various types were created in all forms of management in the Sughd region. During 2020, farmers of the region harvested more than 1,500 tons of products from greenhouses, including 852 tons of tomatoes, 223 tons of cucumbers and 271 tons of lemons.

In 2021, another 36 modern greenhouses will appear in the cities and districts of the Sughd region.

Potatoes of Uzbekistan – what caused the high prices and can they be reduced in the future?

Record prices for herbs in Russia, Ukraine, and Georgia – will Georgia...