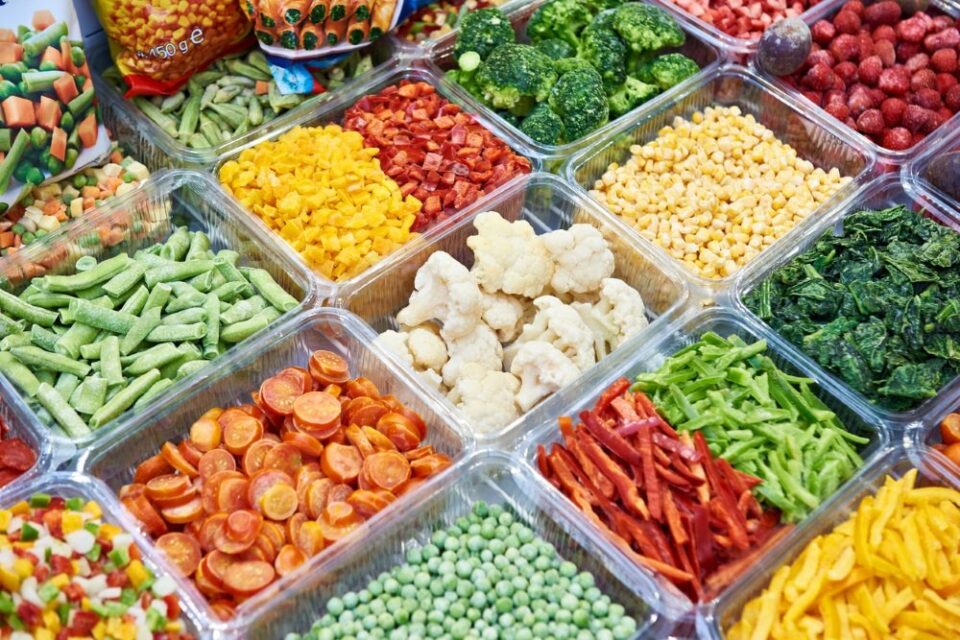 EastFruit continues its series of analytical materials on the potential impact of Russia’s economic problems caused by its barbaric invasion of Ukraine on the Egyptian market. You can read our analysis on whether the demand for Egyptian potatoes will decrease and what will happen to the exports of Egyptian potatoes here. Our article on how Russian aggression will affect the supply of Egyptian carrots, onions, and garlic to Russia is available here.

In the third, and final, part of our analysis, we assess the prospects for the exports of dried and frozen vegetables, lettuce, and sweet potatoes from Egypt to Russia in 2023.

Egypt has been actively increasing the export of frozen vegetables in recent years and the growth rate of their exports to the Russian market is impressive. See the chart below. The deliveries have grown 3.5 times in 4 years! 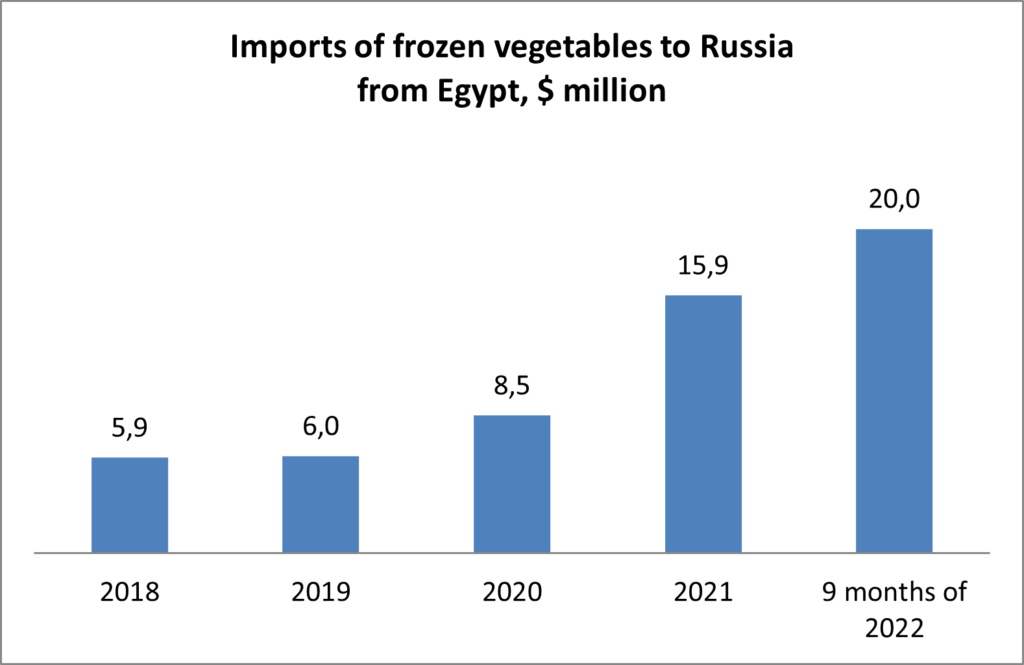 The total export of frozen vegetables from Egypt is also impressive and has been growing since 2019. 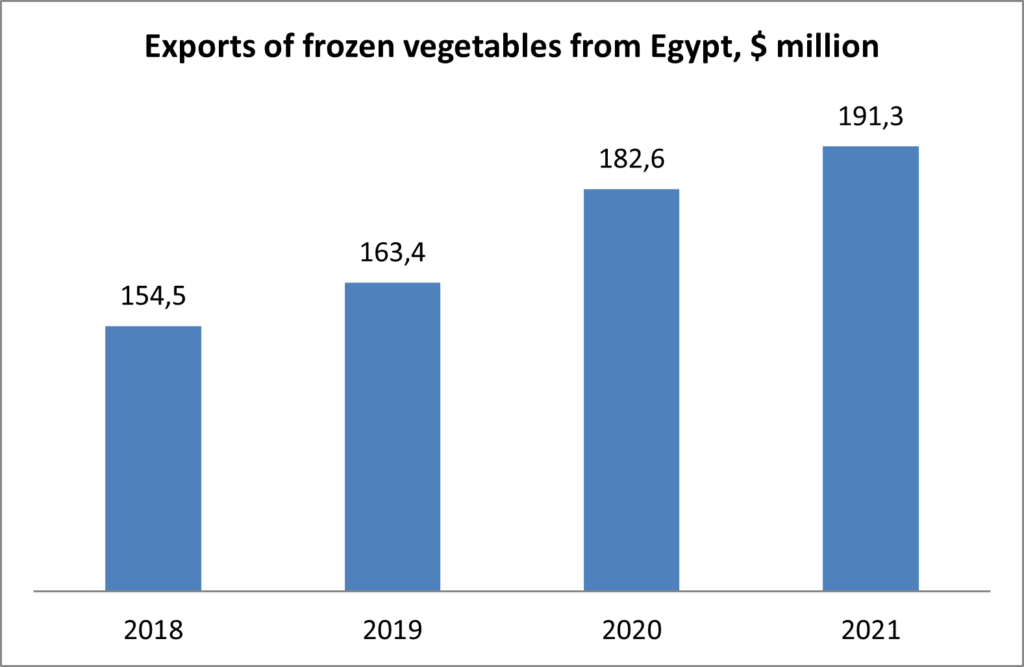 Although there was a high growth rate in the volume of imports of frozen vegetables from Egypt to Russia in 9 months of 2022, the outflow of part of the Russian population due to the mobilization announced at the end of September 2022 is not taken into account there. These people of working age, most of whom were employed in various fields and value their free time, often use frozen vegetables in packages for home cooking.

Therefore, in terms of increasing the exports of frozen vegetables, Egyptian exporters should focus on more reliable markets. In addition, the markets of many countries are already open to Egypt, and the geography of these exports from Egypt is well-diversified. The largest importers of Egyptian frozen vegetables are the United States and Saudi Arabia. At the same time, the volume of exports there is 1.5 times higher than in the Russian Federation. Other major buyers are Italy and the UAE, which buy no less frozen vegetables from Egypt than Russia. In 2021, Egypt exported frozen vegetables to more than 25 countries, 1 000 to 26 000 tonnes each.

As to Russian imports of dried vegetables, we note that even with the growth in their supply to Russia, Egypt’s share in the Russian market in 2021 was only 5.6%. Therefore, mutual dependence in this category is not too high.

Given the good diversification of the geography of dried vegetable exports from Egypt and the low dependence on the Russian market, EastFruit analysts note a low level of risk for Egyptian exporters in fluctuations in demand for these products in the Russian market.

Greenhouse fresh tomatoes: Over the past few years, the volume of Egyptian tomato imports to the Russian market has been steadily growing, while the total volume of tomato imports to Russia has been declining. For example, the total volume of imports of tomatoes to Russia in 2018-2021 decreased from 577 700 to 427 000 tonnes, while the volume of their imports from Egypt increased from 1 800 to 4 200 tonnes in the same period. 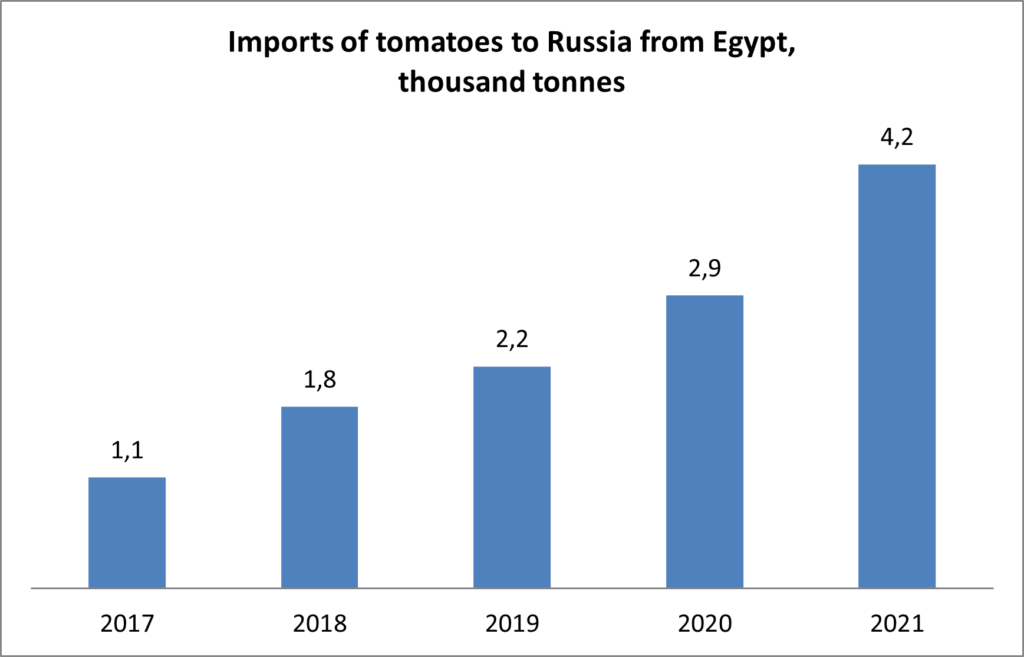 We are likely to see an interruption or stagnation of the growing trend in the supply of Egyptian tomatoes to the Russian market at the end of 2022. Also, EastFruit experts do not expect an increase in demand for imported fresh tomatoes on the Russian market in 2023 and foresee a decrease in their demand due to the worsening economic situation and lower incomes of the population, as well as the outflow of part of the solvent population due to mobilization.

Noteworthy, in contrast to the supply dynamics of Egyptian tomatoes to the Russian market, the total volume of fresh tomato exports from Egypt shows an opposite picture, as you see in the graph below. 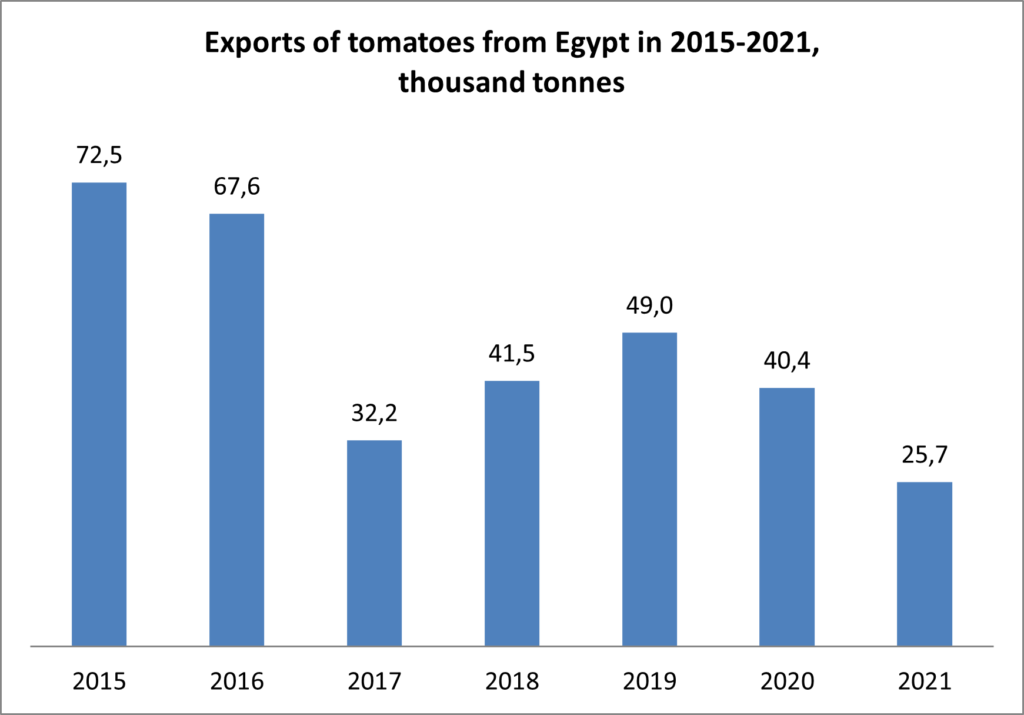 The total export volume of tomatoes from Egypt in 2021 was almost 3 times less than the record figure of 2015, and the lowest in the last 10 years. At the same time, the supply of Egyptian tomatoes in 2019-2021 decreased even to rich countries such as the UAE (more than 3 times), Kuwait – (more than 8 times), the Netherlands – (4 times), and Saudi Arabia – (1.5 times). In other words, the supply of tomatoes from Egypt to the Russian market steadily increased with a simultaneous sharp decrease in their supply to the markets of the Middle East and the EU.

Just as in the case of tomatoes and for the same reasons, EastFruit experts see no significant grounds for an increase in demand for head lettuce on the Russian market in 2023.

According to our preliminary estimates, Egyptian exports of head lettuce to the Russian market at the end of 2022 have already shown a decrease compared to 2021. However, unlike tomatoes, Egypt’s lettuce exports to wealthier countries continued to grow.

Thus, in the face of an expected decline in demand for fresh salads in the Russian market and given the downward trend in the volume of Egyptian lettuce exports to Russia over the past few years, Egyptian producers and exporters should look for alternative markets in their region.

Sweet potatoes: Russia has been actively increasing its imports of sweet potatoes from Egypt in the past few years. The import volume increased from $390 000 to $1.2 million from 2019 to 2021. However, even considering this growth, the share of the Russian market in the total exports of Egyptian sweet potatoes in 2021 was only 2.2%.

The total volume of Egyptian sweet potato imports to Russia did not exceed 1 000 tonnes per year until 2019 and reached 3 000 tonnes only in 2021. Egypt is the largest supplier of sweet potatoes to the Russian market, and its share in this market in 2021 was 65%. Egypt’s important competitor in this market is Honduras with a market share of about 20%, while Guatemala, Israel, and China share the rest of the market.

Thus, the “Russian factor” is not yet important for Egyptian producers and exporters of sweet potatoes, as EastFruit analysts conclude.