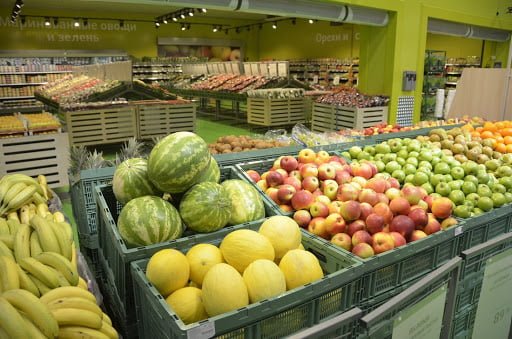 Uzbekistan is the hotspot for supermarkets. With a large population of 33 million, very good demographics, and GDP growth rates above 5% annually, this country represents an attractive market opportunity for international supermarket chains. Uzbekistan is also among the global leaders in exports of certain fruits and vegetables and it could become an interesting source of produce for international market participants. Thus, EastFruit pays very close attention to retail trade developments in Uzbekistan.

The EastFruit team conducted one of their regular quarterly audits of the fruit and vegetable departments of supermarket chains in eight cities of five countries: Kyiv, Odesa, and Dnipro (Ukraine); Chisinau (Moldova); Tbilisi (Georgia); Tashkent (Uzbekistan); and Dushanbe and Khujand (Tajikistan) on November 24-25, 2020.

Our audit methodology and history can be found at the end of this article. Produce departments are of critical importance to the whole retail business of supermarket chains of any format. Thus, EastFruit audit results very often suggest if the chain is doing well or losing to competitors.

Makro Express 24/7 is a new format from the Makro chain, which is the largest in the country by the number of stores. The Makro Express format is represented by small shops with a retail area of 70-500 m² within walking distance from residential areas. At the end of November, Makro opened its 18th Makro Express 24/7 store in the express format with the round-the-clock operation. In general, Makro was opening stores very aggressively expecting many new competitors coming to the market.

The Green Apple and Andalus supermarkets are very few in numbers. The Green Apple chain currently has 3 stores and Andalus has only 2 stores. Also, due to their opening delays, we could not include the Carrefour chain as it had not opened by the time of our audit. However, it did open at the end of 2020 and we will cover it in the upcoming spring audit.

In the overall rating by the four criteria, the small Green Apple chain surprised everyone and unexpectedly took the lead. Green Apple stood out in terms of produce quality as well as quality of the produce department. It was also very competitive in price yielding only to the hard discounter Havas. Green Apple’s weakest point was in the relatively poor assortment of produce with 87 positions on average vs Makro, who was the leader in assortments, with 130.

With three out of four criteria being very competitive, Green Apple, despite being a small chain, has already gained its popularity among consumers in Tashkent. We noticed that it was very busy compared to others and clearly has good development perspectives.

The leaders of the previous ratings Korzinka and Makro supermarket chains took the second and third positions respectively. Makro Express 24/7 chain was among the outsiders with the highest prices, small assortment, and relatively low quality of products.

Korzinka was ahead of Makro in price as well as produce and department quality but had a 14% smaller assortment of fruits and vegetables.

Makro’s main problem was in poor price competitiveness, which was not justified by the quality of fruits and vegetables nor quality of departments. We suppose management’s main focus was on securing the greatest number of stores before it became more expensive to enter the market and competition moves in. In one of the interviews, Makro’s CEO said that their main competitors are bazaars. Thus, having many stores, including convenience stores in Makro Express 24/7 format, helps them gain market share from the traditional bazaars.

In the future, we expect that competition in the fruit and vegetable trade market in retail chains in Uzbekistan will only intensify, which will have a positive impact on the quality and efficiency of production, storage, and trade for the whole country. This will be facilitated by the possible appearance on the market of new international supermarket chains Carrefour and Magnum Cash & Carry.

History and methodology of the EastFruit retail audits.

The methodology and concept for retail audits were designed by Mr Andriy Yarmak back in 2009 and widely used initially in Ukraine by Fruit-Inform.com, a leading analytical fresh produce market company in the country. Audits were conducted one or two times per year. In 2018, under the leadership of Mr Yarmak, who joined FAO in 2011, and in cooperation with Fruit-Inform and the Ukrainian Horticultural Association (UHA), EastFruit adopted this methodology to be used internationally and conducts audits 3-4 times per year in Moldova, Georgia, Russia, Tajikistan, Uzbekistan, and Ukraine.

Audits are always conducted on the same day or during two days in all cities.

Auditors are trained before each audit to make sure key elements of methodologies are understood uniformly in all cities of the EastFruit retail audits.

Cross-checks of the audit results are regularly and randomly conducted.

There are four sets of criteria EastFruit uses in the produce department audits:

Information collected is always analyzed by experienced specialists, verified for possible mistakes and then processed using the same standard methodology.