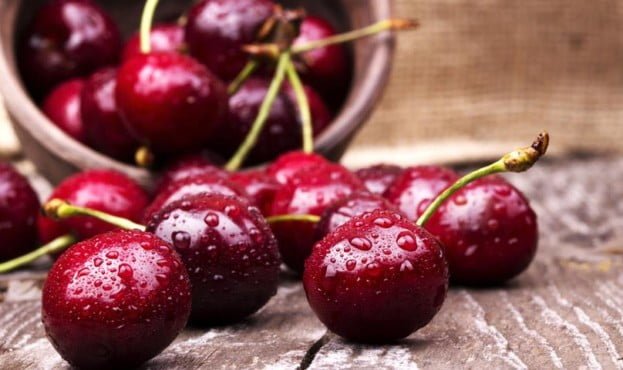 At the same time, the supply on the domestic market at the beginning of July exceeds the demand. In this regard, the experts of agricultural producers’ associations note that the export demand for Moldovan cherries is also small and supplies are not systematic yet. For the second week now, large horticultural enterprises have been exporting to the markets of Russia and, to a lesser extent, Belarus. However, “compared to the second half of June and the first half of July last year, the export volume is several times lower.”

Historically June is the month of maximum exports (in terms of revenue and volumes) of Moldovan cherries. 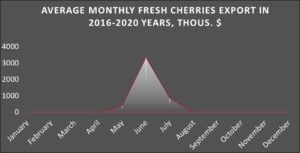 2021 in this respect differs from the previous four to five years (only 2017 was partly similar due to the rainy and cool June). In the current agricultural season, the beginning of the peak season has shifted about two to three weeks ahead, to the second half of last month. At the same time, there are rains in Moldova in July, as well, and in some regions they are heavy. Consequently, agronomists of horticultural enterprises believe that the most active period for selling cherries in July will also be relatively short: 14-20 days. The total volume of cherry exports is unlikely to exceed that of previous years.

The problem is that due to precipitation and sudden changes in air temperature, fruits crack. . As precipitation and high humidity continue, even on intensive farms covered with nets and foil, cracked and even whole fruits will begin to rot quickly on the trees. Another important point is that due to the abundance of moisture, the organoleptic characteristics, density and shelf life of cherries change for worse. Moreover, large fruits suffer from a decrease in quality faster than small ones. There are more large cherries in the harvest this year, alas, they deteriorate and become cheaper faster than small berries.

It should be noted that in the previous two years wholesale prices began to increase at the end of the first week of July, and by the end of the month, i.e. at the end of the sales season, they even exceeded the starting price level. At the end of July 2020, the latest prices for large cherries were in the range of 35-40 MDL/kg i.e. 3-5 MDL/kg higher than at the beginning of the season.

However, given the weather conditions, there might not be a traditional increase in prices for late cherries in July this year. According to the pessimistic forecasts of marketing specialists of agricultural organizations, the average wholesale price of cherries exported will hardly exceed $ 1/kg this year.

It should be taken into account that the main export directions of Moldovan cherries in the previous five years were the markets of Russia and Belarus.

At the same time, Belarus, Russia and Ukraine paid the lowest prices for cherries exported from Moldova. Sweden and Romania bought Moldovan cherries cheaper than other EU countries. At the highest price, cherries from Moldova are exported to Germany and Croatia. The heads of the largest and most technically advanced horticultural enterprises are counting on German buyers in 2021. However, the demand is not high yet. Representatives of several enterprises have now started negotiations with European customers; thus, the volume of exports might increase. 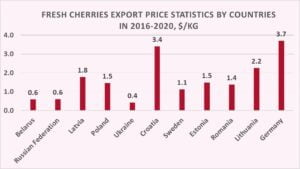 Given the current weather conditions, according to marketing experts of farmers’ associations, producers of cherries would be happy to sell them to the European Union for processing. However, European traders are now more oriented to buy Moldovan apricots for processing.