Home › Horticulture market › Market reviews › Why are Ukrainian apple prices twice as low as a year ago?

EastFruit analysts draw attention to a pricing feature of this year – wholesale prices for apples in Ukraine in the second half of June 2021 remain extremely low. Popular apple varieties are sold on average twice as cheap as at the same time in 2020, despite the fact that most market participants expected an increase in apple prices in the current season.

The analytical work by our colleagues from APK-Inform: Vegetables and Fruits in May 2020 showed that the total apple harvest in Ukraine is still likely to grow, despite the damage from frost. Together with the EastFruit analyst team, we also studied the prospects for apple harvest in Turkey, Iran, Russia, Georgia, China, the USA, Poland and the EU as a whole, and considered a possible decrease in supply from Moldova. Then we warned market participants about the high probability of a decrease in apple prices in the new season, as the total regional supply of apples was forecasted to be significantly higher than in the 2019/20 season. Despite the fact that later we had to lower some of the estimates for several countries, the general conclusion turned out to be correct – there were more apples than the market demanded, which means that prices are unlikely to repeat last year’s records.

This was confirmed by the absence of a noticeable increase in prices throughout the season. Moreover, in the first part of the season, wholesale prices for some popular and even export-oriented varieties remained either at the same level as in the previous year, or were even lower. However, the real picture for the market became obvious only in late April – early May, when the price increase for apple did not follow, although a year earlier prices were increasing dynamically during this period. 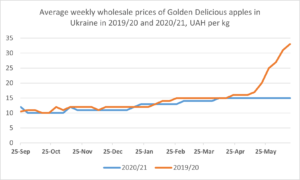 Moreover, given a sharp increase in apple supply on the market, its sales in May became more complicated. This was typical not only for Ukraine, but also for all countries in the region that have any basic infrastructure for storing apples. For example, in Moldova, plants processing apples of the 2020 harvest into apple concentrate are still operating! Let us remind that in the second half of June prices for apples for processing do not cover the costs of growing, harvesting and storing apples. At the same time, Moldova has access to the Russian market, but still cannot sell the apple leftovers from its fruit storages, because the situation was similar in the Russian market – there was still a lot of Russian apples, as well as imports from Iran, Turkey and other countries. Also, negative price trends for apples in spring were observed in Poland and many other EU countries.

“Farmers hoped for an increase in demand for apples in the second half of May-June due to an abnormally cold spring and a serious delay in the start of the berry harvesting season. Although the demand did increase and producers of high-quality apples increased sales, prices did not increase. Producers of apples that did not conform to high quality parameters still experienced difficulties with the sale of remaining products” Andriy Yarmak says.

The table of monthly price deviations of the current season from the previous one for Ukraine for the most popular apple variety “Golden Delicious” is worth paying attention to. 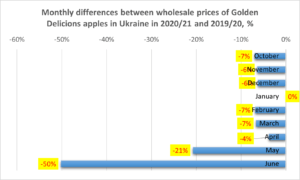 As you can see, only in January prices in UAH were comparable to last year. As for the rest, the average price for Golden apples was lower, which means that the total income of producers decreased. But we noted the most serious deviations for May and June, although not all producers preserved apples till that time. It turns out that this season the advantage was gained by Ukrainian farmers who sold apples in the first half of the season.

“We have been emphasizing for many years that the competition in the global apple market is constantly growing, apple production is growing, but the global apple trade, on the contrary, is decreasing. This is bad news for those who do not focus on producing apples of premium or close to premium category, because there are too many apples of average quality on the market,” the FAO economist explains.

In this regard, it is worth recalling the significant changes in the apple business in recent years. In particular, Iran, according to EastFruit’s estimates, can become a leader in global apple exports this season. But until recently, most of the world’s exporters did not consider Iran to be a serious competitor, as it does not work in the premium segment. However, apple surplus in the segment of medium-quality fruits has a negative impact on the prices of apples in the premium segment.

Turkey is another country the participants in the fruit market often forget about, but which is constantly increasing its influence on the global apple market. However, Turkey has already increased its apple exports by 48% in the first nine months of this season! Therefore, Turkey and Iran are currently the most serious competitors in the global apple market for all its participants. In addition, no other country is increasing apple exports as quickly as these two!

The most notable thing on the monthly Turkish apple export chart is the seasonal changes. In the first quarter of the current season Turkey exported 6% less apples than a year earlier, but in the second it exported 33% more. And in the third quarter of the season, i.e. in February-April 2021, apple exports from Turkey more than doubled! This explains why apple prices in the region did not increase in spring, when almost everyone expected their growth. 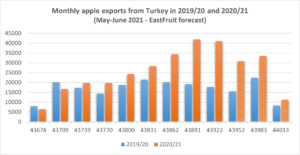 These assumptions are confirmed by statistics – the export of Turkish apples to Russia in the first nine months increased most sharply – by 29 thousand tons, or 2.8 times. Exports of apples from Turkey to India and Libya have also increased significantly. But in terms of the growth rate of export, another country in our region, Uzbekistan, took the first place among the sales markets for Turkish apples. Exports to this country during the analyzed period increased by 7.3 times to 900 tons. We also note an increase in the export of apples from Turkey to Azerbaijan by 2.8 times.

EastFruit forecasts that Turkey will export more than 300 thousand tons of fresh apples for the first time over the season, increasing exports by 48%. However, the real volume of Turkish exports may turn out to be even higher.

Accordingly, the competition in the apple market continues to grow and the next season may well become another challenge for apple growers in Ukraine and Moldova.

“According to preliminary estimates, farmers in Ukraine and other countries of the region, in contrast to the previous two seasons, suffered minimal losses of potential apple harvest this winter and spring. This means that a record apple harvest is very likely. Even if Turkey and Iran happen to reduce the pressure on the market this season, it would be better for our apple producers to take care of the distribution channels for their products, especially for export markets. Without refinement, namely high-quality sorting and packaging of apples, it will be difficult to sell them even on the domestic market. However, in order to sort apples, they must be of good quality when harvested. Apple sales should also be systemic and constant, and producers should not play with prices, as they often do in Ukraine. In addition, industry associations should step up their efforts to open access for Ukrainian fruits to sales markets such as Egypt, India, Vietnam, Indonesia, etc., where our main competitors are already making good money,” Andriy Yarmak advises.