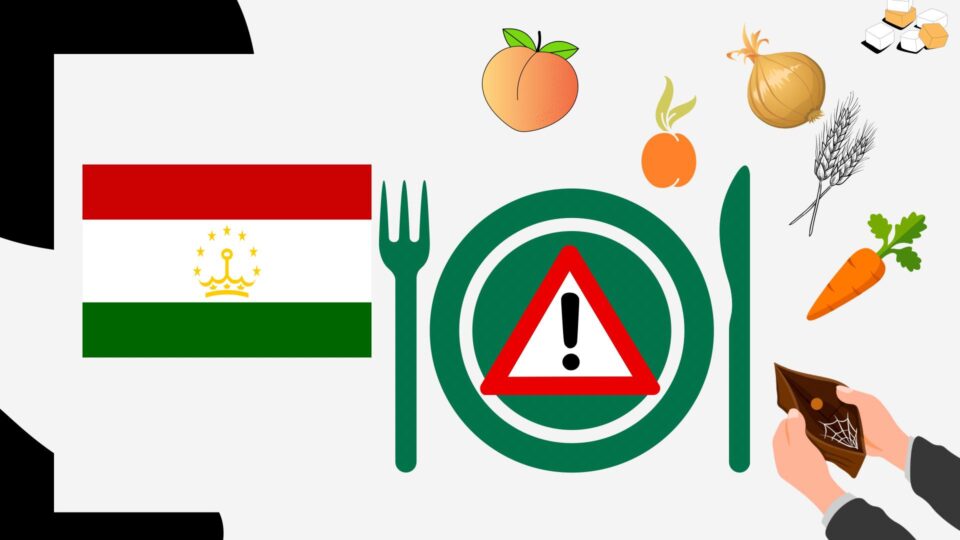 In this article, we will outline the situation regarding the food security, macroeconomic and financial stability, as well as consumer sentiment in Tajikistan and try to assess the prospects and options for the developments in the future, given russia’s perfidious invasion of Ukraine, which undermined the foundations of the well-being of the whole world.

Tajikistan is a net importer of food. The negative trade balance is about $800 million per year. In other words, relatively small Tajikistan has a sharper negative food trade balance than neighboring Uzbekistan.

At the same time, 31% of imports are direct deliveries of food from countries that are directly involved in the war. About 30% of Uzbekistan’s food is imported from russia and about 1% from Ukraine. Imports from belarus are relatively small. The data on the supply of food from russia to Tajikistan may be somewhat underestimated, as partially food enters the country through intermediaries from Kazakhstan, and Kazakhstan is the largest supplier of food to Tajikistan with a share of 40%.

Tajikistan’s food exports are relatively small, less than $100 million a year. However, the real numbers could be significantly higher. Nevertheless, the country’s dependence on exports is indeed not too high in most positions. Only in the category of fruits and dried fruits, as well as some early vegetables, the opportunity to export helps maintain prices in the domestic market. Of course, the sharp decline in the purchasing power of russian residents is bad news for Tajik exporters and encourages them to look for alternative markets right now.

The most sensitive positions of food trade in Tajikistan

Tajikistan’s critical import categories are wheat and wheat flour, vegetable oils and fats, and sugar. These three product categories account for more than 55% of all imports. About 10% more are fodder grains and oilseed meals used in animal husbandry, where the country is also dependent on imports.

Although the dependence on russia in wheat imports is low, almost all food wheat in Tajikistan comes from Kazakhstan. At the same time, Kazakhstan recently announced that wheat exports could be banned or severely restricted, which could create serious problems for Tajikistan.

There should be no big problems with vegetable oil, although the increase in its cost will affect its availability for low-income segments of the population. 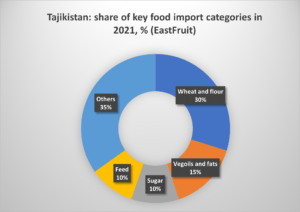 Slightly worse is the situation with sugar, which Tajikistan partially imported from russia and belarus. However, the main supplier of sugar to the country is India, which means that Tajikistan can try to increase the volume of imports from it. In any case, one should expect price growth here too, which is a significant problem for Tajikistan.

Feed will also become very expensive for the country’s livestock producers. Ukraine, which has been the largest feed exporter in the region, will obviously not enter the market many more months, even if the war ends. Although feed can be bought, its prices could rise the most, hurting Tajikistan’s already not-so-efficient animal husbandry and exacerbating the country’s access to this important source of protein.

The exchange rate of the national currency of Tajikistan somoni

Before the start of russia’s war against Ukraine, the official exchange rate of the Tajik somoni against the dollar was 11.3, and now it is closer to 13.0. Due to the panic that arose, the exchange rate on the black market even rose to 14.8 TJS, but then it was fixed at a level close to 13.0 TJS.

Accordingly, almost all imported goods in the country have risen in price along with the exchange rate by at least 20%. At the same time, according to market participants, many traders are already counting the rate at 15 TJS, as they are not sure that they will not go bankrupt later. Thus, the increase in price is 30%. This applies, of course, only to imported goods.

In rush days after the start of the russian war against Ukraine, when it became clear that russia’s plan had failed, people massively bought oil, flour and sugar. They, in turn, have risen in price by 30%. All this was aggravated by russia’s bans on the export of these goods.

Traders reacted quickly and immediately increased the supply of sugar from India. Indian sugar is 20% cheaper than russian, but many people prefer products from the russian federation, considering them to be of higher quality.

Many people have stopped investing in real estate, and sales in the used car market have risen, which may have implications for the construction business in Tajikistan in the long run.

Meanwhile, the range of food products has not changed. There are still no empty shelves in stores, and all products are constantly present. Only the prices have changed.

Will the crop structure in Tajikistan change this year?

The crop structure is unlikely to change drastically. Only onions in large volumes were exported to the russian federation, but they were sown in the fall. Farmers just keep doing what they always do and grow the crops they are used to.

Nonetheless, farmers complain about very high prices for fertilizers, which have risen sharply in recent years. However, prices had risen even before the start of the russian invasion of Ukraine. The news was that russia stopped exporting fertilizers to Tajikistan.

Therefore, since everything is expensive, Tajik farmers will use fewer fertilizers this year. Leading farmers have already bought fertilizers for the upcoming season in winter or transport them from Uzbekistan, since the roads have opened and COVID-19 restrictions with Uzbekistan have been lifted.

However, there will be a decrease in the volume of fertilizer use for the new crop. And this means that the average crop yield is likely to decrease.

The impact of remittances from labor migrants on the Tajik economy

It is obvious that the collapse of the exchange rate of the russian ruble against the US dollar will reduce the volume of cash receipts proportionally. At the same time, Tajik migrants themselves see no reason to return home. They say that prices for the basic products they buy in russia have not risen much, but the cost of renting housing has increased.

There are still many people in Tajikistan willing to go to russia. Trips have become more difficult, as there were no flights to russia for two weeks. However, it seems that the number of flights has been restored now due to the re-registration of aircraft stolen by russia. This means that the flow of migrants will most likely remain large.

Among the measures of state support for business, one can note the introduction of a moratorium on inspections of entrepreneurs until the end of 2022.

Banks realize that the inflow of foreign currency will decrease, so they have already begun to increase the percentage on foreign currency deposits in order to attract foreign currency. By the way, free access to the conversion of the Tajik currency into dollars is available only for the import of vegetable oil, flour and medicines. Banks do not give foreign currency for others aims. There are long queues for currency conversion in banks.

Imports from the russian federation continue to arrive, banks are selling rubles.

What products in Tajikistan have risen in price most sharply?

Sugar and pasta from the russian federation, as well as fertilizers, have risen in price more than others. The increase in prices for other products was within 20% due to changes in the exchange rate.

Prices for imported vegetables and fruits also rose in line with the exchange rate, but prices for local products did not change much, except for normal seasonal changes.

The rest of 2022 will be challenging for Tajik consumers as the war in Ukraine drags on, sanctions against russia continue to escalate, and global food and fossil energy markets become increasingly tense and unpredictable.

Tajikistan will be most affected by trade restrictions imposed on grain and other basic products by major supplier countries. As for the macroeconomics, the impact of a decrease in the country’s income from remittances from migrants will be tangible. This may have a negative impact on the construction and some other related industries.

Producers of vegetables and fruits may also feel the negative consequences of a decrease in effective demand for their products in russia, belarus and Ukraine.