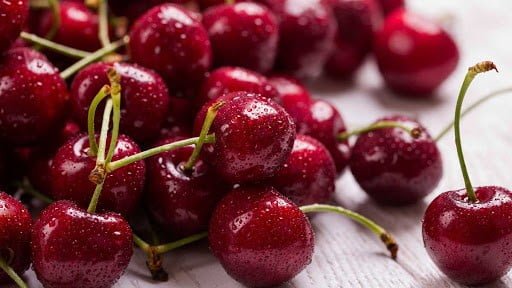 Home › Horticulture market › Market reviews › Cherries in Ukraine are not that cheap. Would exports to Russia have supported the prices?

The end of last week on the Ukrainian market was marked by several messages from cherry producers about low prices and problems with sales, and some media and social networks exaggerated them.

EastFruit suggests finding out whether the cherry market in Ukraine is that close to a catastrophic state, how low the prices are now, and whether exports can help the country.

The current cherries season in Ukraine started late, at the beginning of June, due to the cold spring, but the average price corresponded to that of the last year. However, prices went down then, disappointing producers that had hoped last year’s scenario would repeat this season. Most farms have been affected by heavy rains, and the implications will affect the cherry market throughout the season. 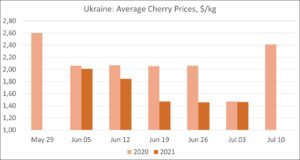 As the season progressed, the price difference was increasing in comparison with 2020. The situation leveled off only in the beginning of July, when the average price stopped at around UAH 40/kg ($ 1.50/kg), which corresponded to the price on the same date last year.

Due to rainy weather, the market shows a significant variation in the quality of cherries and, accordingly, a variation in prices. In the southern regions, wholesale prices for low quality cherries may go down to 15 UAH/kg ($ 0.55/kg). Nevertheless, the demand for high-quality cherries is high, and the price reaches UAH 50/kg ($ 1.80/kg) in wholesale. This is about late varieties of cherries that suffered the least from the rains.

Moreover, if we compare prices to those in the previous years, it turns out that cherries in 2021 are not so cheap. Over the past five years, they were more expensive only last year, and four previous years much lower prices were recorded. This is relevant even on the eve of the season for the latest varieties that usually cost more than early and middle varieties of cherries. 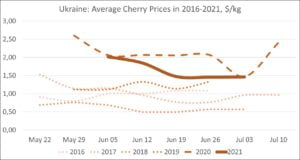 Are cherries in Ukraine cheaper than in other neighboring countries? This can be verified with EastFruit’s wholesale price monitoring in eight countries in the region.

Of these eight countries (Poland, Moldova, Ukraine, Belarus, Russia, Georgia, Uzbekistan and Tajikistan), only in Georgia, cherries are now more expensive than in 2019-2020. In Moldova, a competitor to Ukraine, prices are lower than on the Ukrainian market and cherries are cheaper than two years earlier. And this is despite the fact that Moldova exports 6-12 thousand tons of cherries annually, while Ukraine in its most record season exported only 3.7 thousand tons, of which 500-600 tons were sent to the Moldova, apparently, for re-export to the Russian Federation. 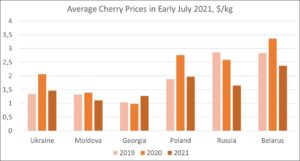 The current wholesale price for cherries in Poland is one third higher than in Ukraine, but the annual export from Ukraine to Poland barely exceeded 100 tons over the past three years, and this season even this volume is questioned due to poor quality of Ukrainian cherries. In addition, prices in Poland decreased compared to last year amid recovery in production after frosts in the 2020 season.

Many Ukrainian farmers believe that access to the Russian market would help them, as “the European Union and other countries do not need Ukrainian cherries”. However, cherry prices fell more sharply on the Russian market this year than in Ukraine, and the price levels in Ukraine and Russia are almost equal. In other words, it is Russia that doesn’t need Ukrainian cherries. Therefore, even if there was access to this market, the difference in prices would not even cover the delivery costs.

The quality of local cherries in Russia is also problematic, but their supply has increased significantly. Moreover, imported cherries in the Russian Federation are a little more expensive than high-quality local ones. Thus, local cherries are sold at maximum $ 2.10/kg, while wholesale prices for those imported from Central Asia and Turkey vary between $ 2.30-2.60/kg.

Additionally, the quality of cherries is also becoming decisive for the successful sale on the Russian market. For instance, given the damage to the cherry harvest from frosts, selling them to Russia was a major concern for Uzbekistan in 2021 because Uzbek fruits began to seriously lag in quality behind fruits imported from Turkey. Most of the producers here use traditional approaches to growing, harvesting and sorting cherries, as they do in Ukraine.

Let us recall that in recent years Russia has remained a key export destination for cherries from Ukraine by means of re-export through Belarus. By the way, the average price in the Belarusian market is similar to the price for imported cherries in Russia, and this level is now the maximum (excluding logistics) that a Ukrainian producer can get when exporting his cherries. But the export to Belarus is up in the air now in view of the latest decisions of its leadership. 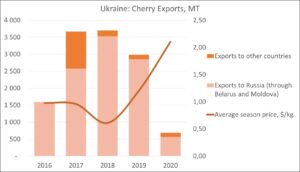 In terms of its need to develop exports, Ukraine is a hostage to one export sales market – Russia through Belarus and, to a lesser extent, Moldova. Moreover, export is now more a forced measure to relieve tension on the domestic market, and not a sales strategy. Thus, Ukrainian exports reached their peak during the period of relatively low prices in 2017-2018.

Even more threatening for Ukrainian producers and exporters is the constantly growing competition on the Russian market with other suppliers, despite the continuing growth in cherries imports in the Russian Federation. So, three countries of the post-Soviet space are among the ten largest world exporters of cherries and they aim primarily at the Russian market.

Thus, in order to successfully develop exports, Ukraine will need to explore different directions, as the Russian market, previously opened by Belarus, may become completely closed. Belarus itself consumed some cherries imported from Ukraine, but these volumes were small, and given the current developments there, demand for imported fruits is unlikely to increase.

In the meantime, record volumes from Ukraine not to Belarus or Moldova were sent back in 2017 to Poland (860 tons), Hong Kong (103 tons), Germany (70 tons), Great Britain (34 tons) and the Netherlands (19 tons). In subsequent years, Ukraine lost these export directions, switching to Belarus and, as a result, it now risks losing this sales market as well.

Are Ukrainian cherries needed in other countries and what markets might be of interest to Ukrainian suppliers? Several years ago, the team of the Food and Agriculture Organization of the United Nations (FAO) and the European Bank for Reconstruction and Development (EBRD), together with the Ukrainian Horticultural Association (UHA), found answers to these questions and found buyers willing to buy Ukrainian cherries. However, for this a number of requirements must be fulfilled.

“First of all, a study of the global and regional cherry markets shows that a real niche for Ukraine is the development of production and export of late cherry varieties. It is important for us to enter the market when the largest regional player, Turkey, has left it. In July, there are no longer supplies from Turkey on the market of cherries in the Middle East, but expensive cherries from the United States become available and prices on the market are increasing. In the market of the EU countries, competition also sharply decreases in the second half of July and prices for cherries grow, but demand remains high, as most of the EU citizens go on vacation. In Ukraine and other countries of the region there are no more cherries from the countries of Central Asia and Turkey at this time,” Andriy Yarmak, economist at the Investments Centre at FAO explains.

“The question is the selection of varieties and optimization of the entire cycle of cultivation, harvesting, cooling, sorting and packaging. Ukrainian producers need to focus on obtaining large-caliber cherries, using hydrocooling  technology, optical sorting and packing cherries in bags with MAP technology. This will allow to export cherries anywhere in the world. Apart from the EU and the Middle East, Ukrainian cherries may well be demanded in the countries of Southeast Asia during this period. Interestingly, the weather risks when growing cherries of late varieties in Ukraine are also lower – later flowering reduces the threat of loss from spring frosts, and later ripening reduces the risk of cracking from rain,” Andriy Yarmak said.

However, this does not mean that high-quality cherries of early varieties will not be in demand in foreign and domestic markets. For example, wholesale prices for cherries in the EU this year were significantly higher than last year. Importers from Italy, France, Germany were interested in purchasing cherries even from Ukraine, but there were almost no quality products. At the peak of early cherries harvesting in Melitopol, high-quality cherries could be exported to the Italy at up to 4 euros per kg. By the way, such deliveries have already been carried out quite successfully. However, the majority of Ukrainian farmers are more used to work the old-fashioned way, not putting effort to product refinement.

At the same time, the EU countries and even China are switching to the cultivation of cherries under protected culture with anti-rain systems protecting both from rain and birds. In the last two years, frost protection systems became intensively purchased – to buy this technology for a cherry orchard, a payment should be made a year in advance, since demand significantly exceeds the supply.

Therefore, we draw a few conclusions from this material: