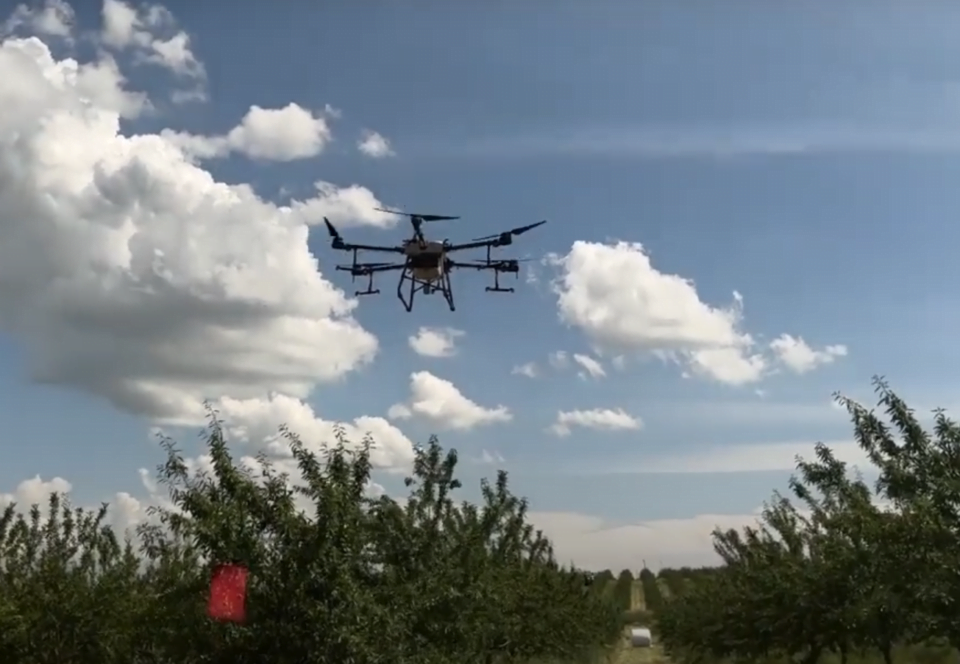 The Georgian EastFruit team visited the largest almond orchard in Georgia “Udabno“, where they watched the testing of an unmanned aerial vehicle (UAV) or, as they are commonly called “drone”, as a sprayer for plant protection products (PPP). The purpose of the test was to evaluate the efficiency of spraying the almond orchard at different speeds and with different levels of active ingredient consumption. Drone DJI Agras T-30 was given for the test drive by the Georgian company Agrodron providing services for spraying fields and orchards in Georgia.

Watch the video below and read the company’s explanation in the text. Do not forget to write in the comments under the video, whether you think this technology to be promising and why.

According to the director of the Udabno company, the company is considering the possibility of using unmanned sprayers instead of traditional tractors, if this method proves itself efficient – primarily, in terms of the quality and speed of spraying (the tractor has its limitations, including the ability to work at night).

Agrodrone in an almond orchard was tested at three different speeds. The intensity and depth of spraying was determined using litmus paper attached to the trees. The distance of the drone from the trees was 2-3 meters on the tested rows of stands, while the speed when processing three different orchards was different. During the test, the weather was windy, which prevented the drone from working properly by changing the direction of the flow. In addition, the wind causes the drone battery to drain faster.

The drone was operated by a team of three people. In addition to direct control of the agrodrone, team members must ensure its safety and continuity of operation, including battery replacement and tank refilling after each landing. According to Agrodrone spokesperson Nika Meskhi, the battery life depends on many factors, including weather, speed and the amount of substance in the tank, but on average, the battery lasts for 7-12 minutes of operation. Interestingly, the agrodrone can process about 1 ha of a field or an orchard in this time.

According to Nika Meskhi, the demand for agrodrone sprayers is growing in Georgia. The company began operating during the pandemic in 2020. Farmers could not spray their orchards on time because in many cases the tractor operators were in quarantine, which increased the demand for this service.

“Initially, farmers were skeptical, but once they became convinced of the efficiency of drones, demand increased,” says Nika Meskhi.

Most of the time, Agrodrone works with annual crops such as corn and wheat, although the company has started working in walnut and hazelnut orchards this year for the first time. In total, the company has already processed more than 1 500 ha of annual and perennial crops this year.

“At this stage, spraying of annual crops is in the greatest demand, although we also consider walnut orchards as potential customers. There are many young walnut orchards in Georgia that may become our clients in a few years, since it is impossible to drive tractors into the orchards without damaging the trees when they grow,” Nika Meskhi believes.

The cost of spraying with agrodrones at the time of the experiment (June 15, 2022) was 50-80 GEL ($17-27) per ha, and it depends on the amount of work and the type of plants. “If the client uses our service several times, in the case of annual crops, the price is 50 GEL ($17) per ha. We charge the maximum price for a one-time spraying of perennial orchards. Our prices per hectare are 10-15 GEL ($3.5-$5) higher than the cost of renting a tractor, but for many farmers this price is acceptable, given that tractors often damage fruits on trees or plants in the fields in the process. For example, in the case of corn fields, tractor processing damages at least 10% of crops. In addition to damage-free spraying, renting drones is more convenient for customers as it takes less time and simplifies the workflow.”

Currently, the company operates only in the East of Georgia, in Kakheti, and has about 50 clients. Potential clients are farms with a land area of ​​more than 5 ha. Next season, the company plans to purchase 5 new DJI drones with 40-liter tanks, which will allow servicing 15 000-20 000 ha per season.