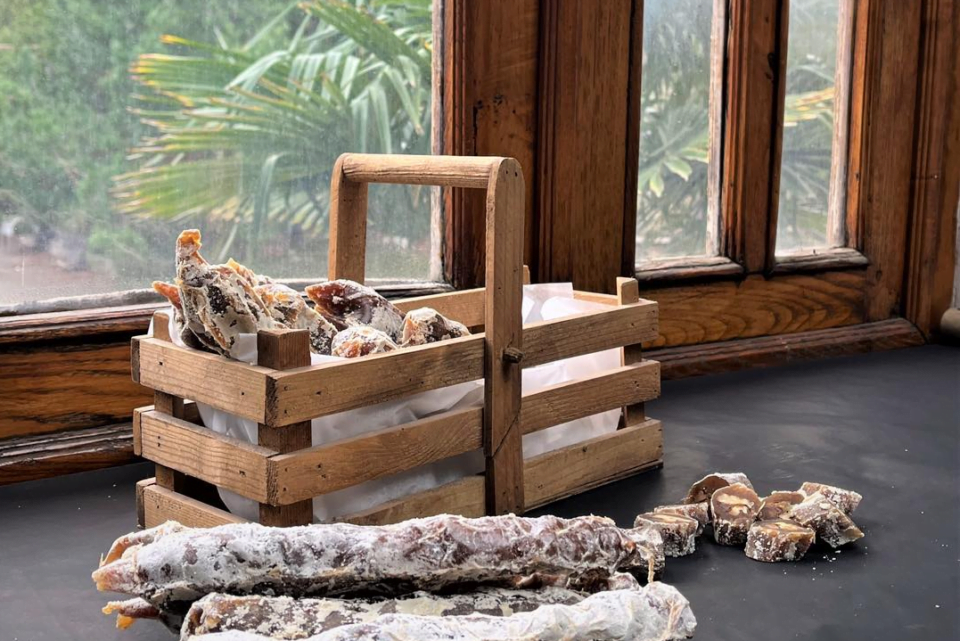 in addition to a traditional assortment, churchkhelas made on wood have recently become available in the branded stores of the Georgian company Badagi – a sign of the approaching New Year holidays. Such churchkhelas are especially appreciated by gourmets for their unusual taste and aroma, with a slight smell of fire smoke. 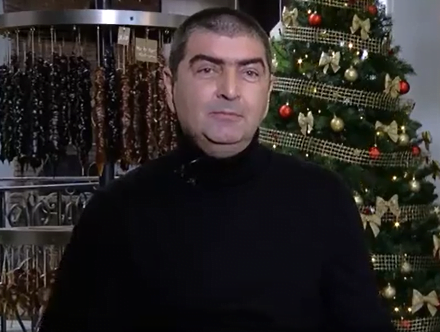 As Vakhtang Kajrishvili, the founder of the Badagi and Badagi+ companies told EastFruit, the company still has only a few more days of churchkhelas for sale. Making wood-fired churchkhelas with tatar (grape juice thickened with wheat flour) is a more labor-intensive process compared to cooking on natural gas. Thus, they are made in small batches at the enterprise and are offered before the New Year. 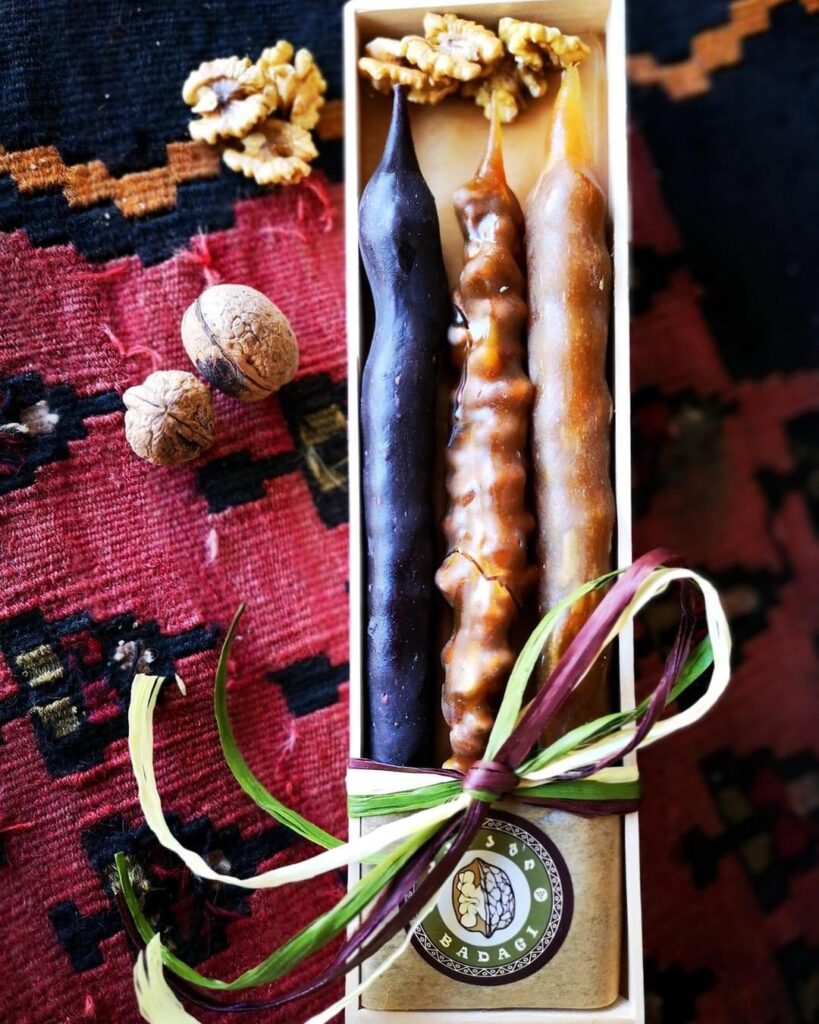 The range of products offered in Badaga stores includes more than two dozen items. These are light (made with Tatar from Rkatsiteli grapes) and dark (made with Tatar from Saperavi) standard-sized walnut churchkhelas – those with halves of the kernel are strung horizontally, close to each other, are valued more, hazelnut churchkhelas, mini-churchkhela, janjukha made with pelamushi (grape juice thickened with corn flour) and hazelnuts, rolled into beautiful tklapi tubes (thin sheets of dried fruit gruel) from several types of fruits, as well as a variety of gift mixes. The average price for 1 churchkhela is 4 GEL ($1.5), and tklapi cost 50-60 GEL/kg ($18.5 – $22.2). 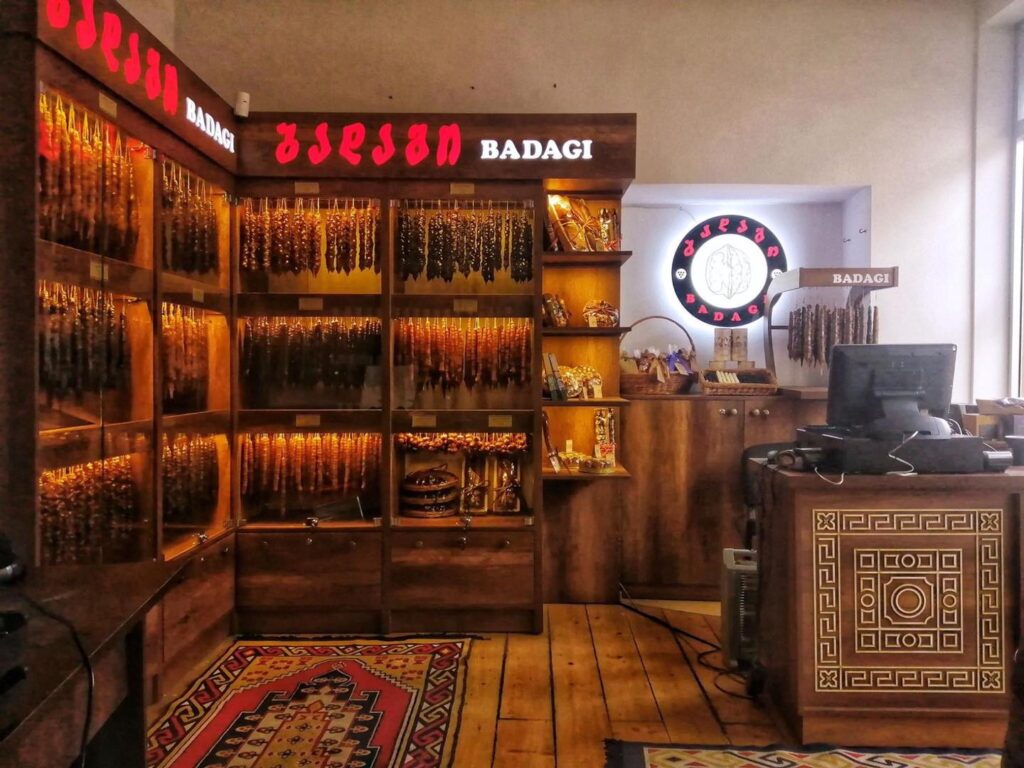 Vakhtang Kajrishvili, originally from the Signagi region (Kakheti region, Eastern Georgia), engaged in producing and selling churchkhelas more than 20 years ago. In the 1990s, when he got married shortly after graduation, the question arose of supporting the family. Georgia was in a difficult economic situation then. He chose churchkhela for production – a traditional Georgian delicacy, the raw materials for which could be purchased locally. At first, he did everything on his own, then he invited his family members, and set up a small production facility in the courtyard of the house. Years later, he built a new building on a separate territory in the village of Tsnori, where a modern enterprise producing churchkhelas (Badagi LLC) was located. Gradually, he increased the capacity of the enterprise, and, with the support of a project by the Georgian Rural Development Agency, he launched a fruit processing enterprise there three years ago, and the production of tklapi started (Badagi + LLC). 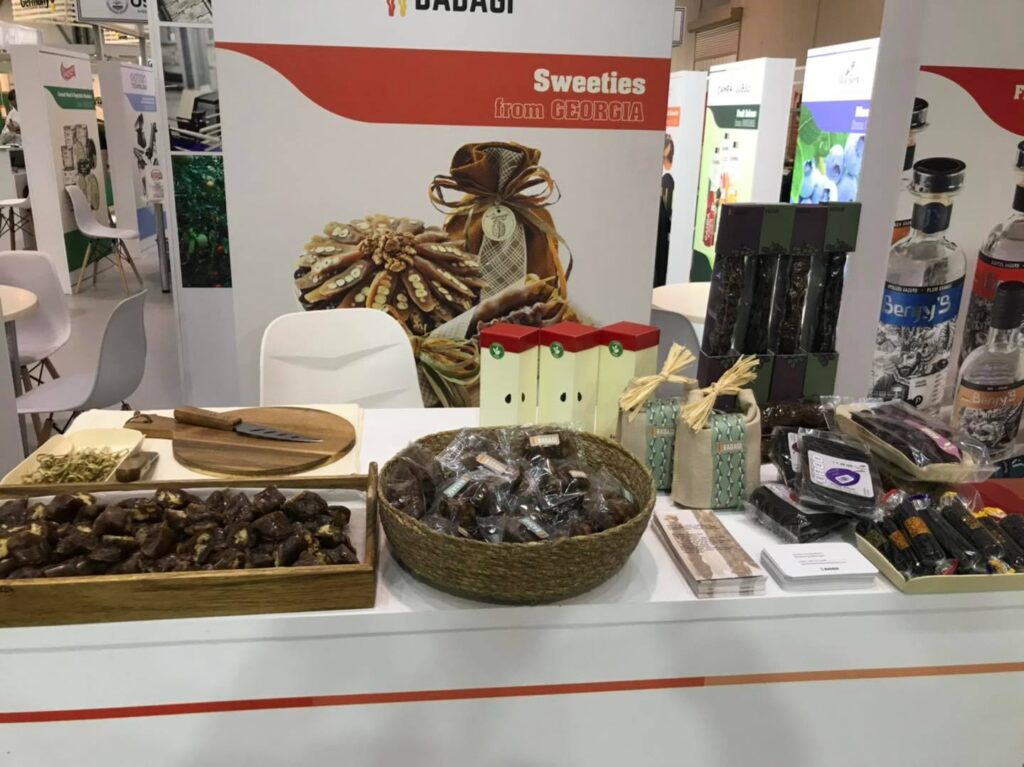 The chain of Badagi brand stores was also developing – the first was opened 12 years ago. In addition to brand stores, most of which are in Tbilisi, Badaga products can now be bought in large supermarket chains, for example, Goodwill, Carrefour, Agrohub, Europroduct. In total, about 200 people are employed at the Badagi and Badagi + facilities. 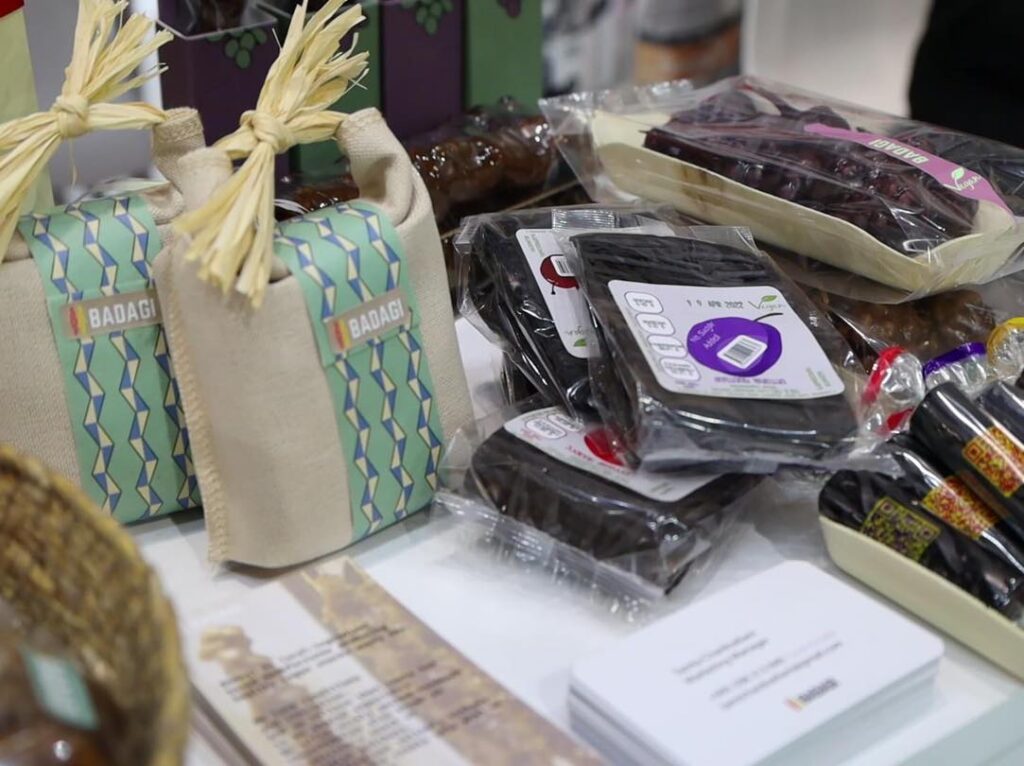 Read also: Canned fruits and vegetables of the Georgian producer are exported to Europe and the USA

During the COVID-19 pandemic, production had to be significantly reduced due to a decrease in demand. Now companies have returned to their previous sales and have even surpassed them. 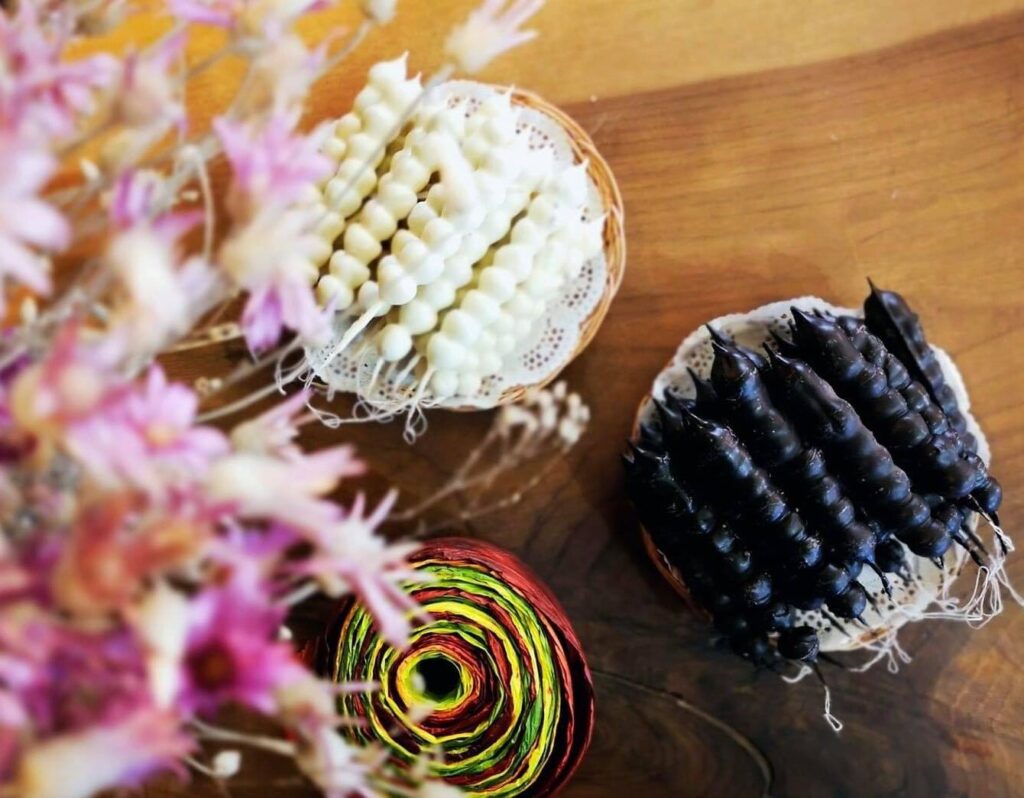 “Currently, we produce 15 000 churchkhelas a day. Tatar is cooked both on natural gas and in special steam boilers. We produce wood-fired churchkhelas in small batches. Our churchkhelas are prepared without adding sugar. Concentrated grape juice for tatar and pelamushi is supplied to us by a local company with which we have been working for years. It processes the grapes so that the water evaporates, and the sweetness remains, and it is quite enough for our products. As for walnuts, we try to work with local raw materials. But usually, it is not enough, and we buy more from Ukraine and China. We are currently making churchkhelas from Georgian walnuts, and we will see what it will be like in January,” said Vakhtang Kajrishvili.

Churchkhela in Georgia is not only an integral part of the traditional New Year’s table. The nutritional value of churchkhela is so high that it allows you to live for several days without any other food, and it can be stored for quite a long time unless it hardens. For centuries, Georgian warriors took churchkhelas with them on long campaigns, and residents of cities and villages stored them in case of a siege. Soon after the start of the war in Ukraine, Vakhtang Kajrishvili sent 7 000 churchkhelas to support the Ukrainian heroes. 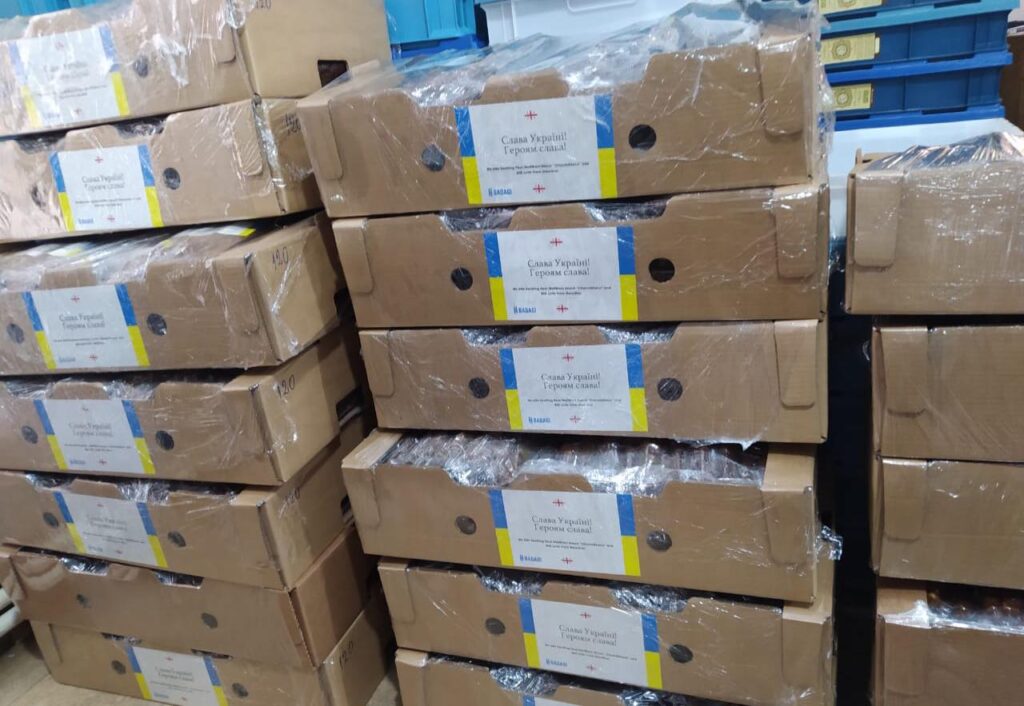 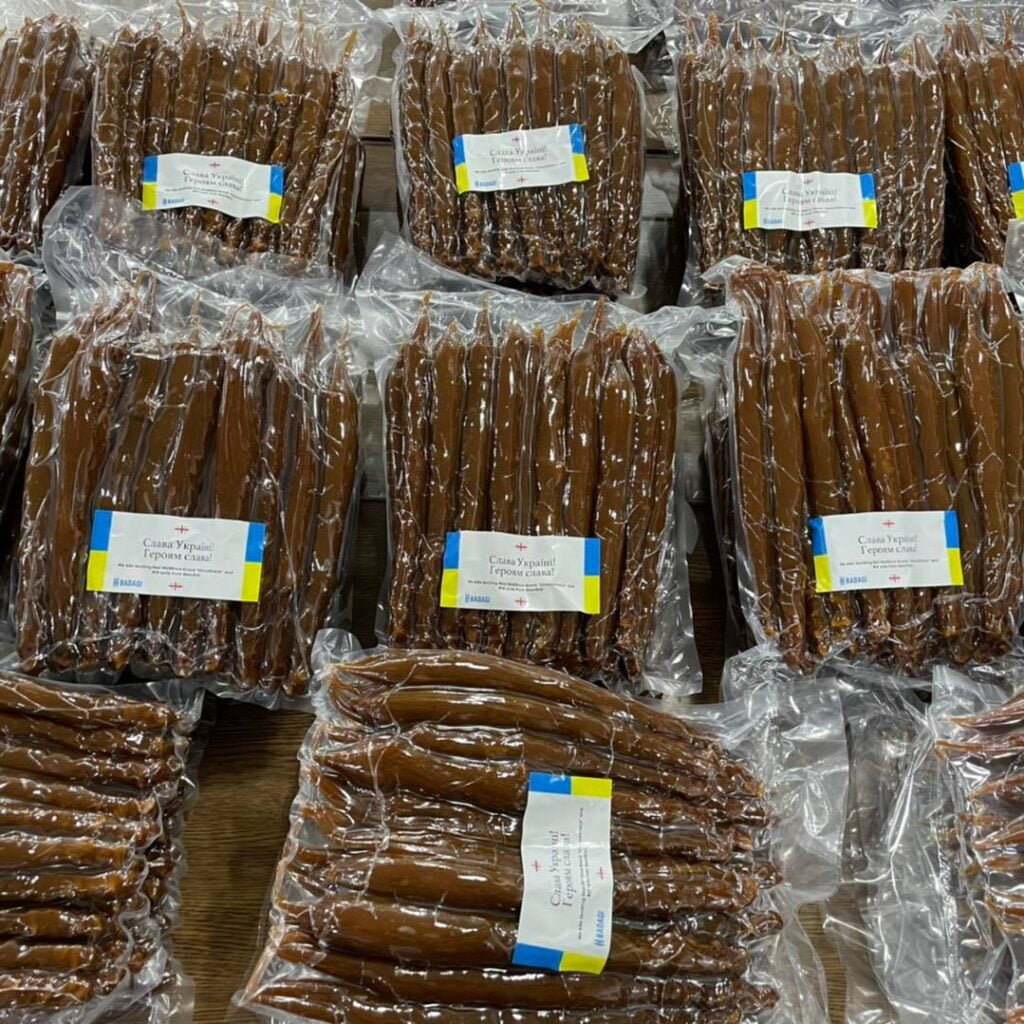 “After the New Year, I want to send more churchkhelas to Ukraine, if possible,” he said. 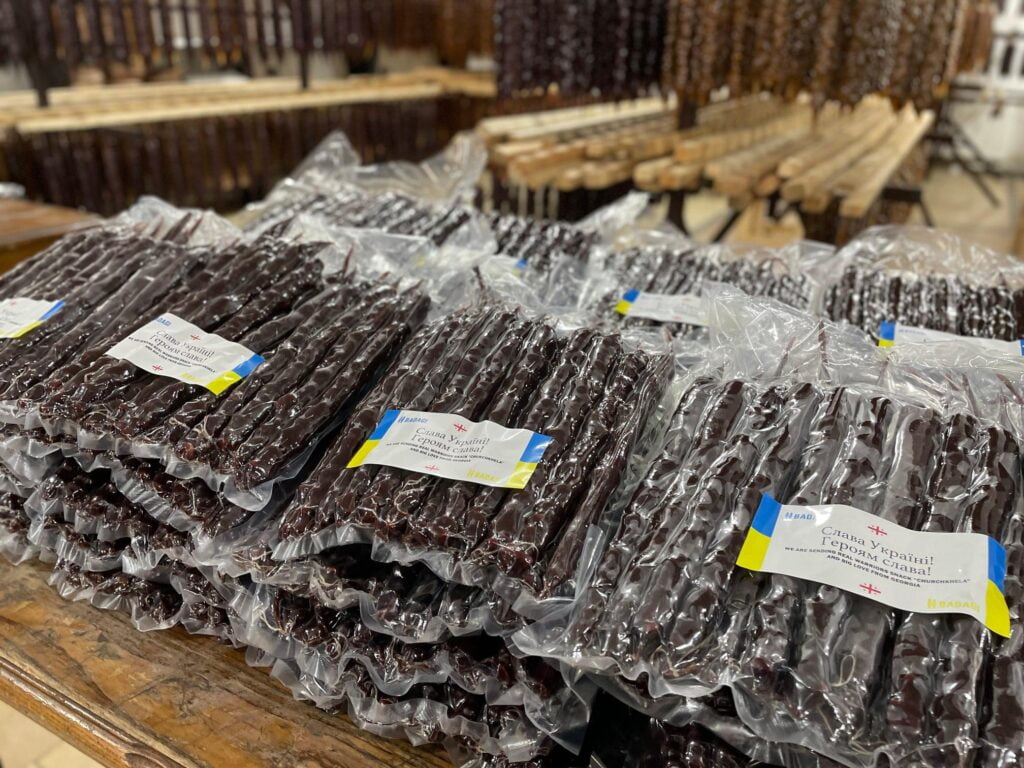 As for tklapi, it is noteworthy that Badagi + became the first company in Georgia to start producing this delicacy in an organized production environment. Currently, the company produces tklapi from tkemali, plums, apples, and figs. The raw materials, fruits, are purchased exclusively from local farmers. Then they are boiled, we get slurry, it is spread in thin sheets and dried in special dryers. About 300 kg of fruits are processed daily at the enterprise, and the finished products are about 7 times less. As churchkhelas, tklapis are made without added sugar. 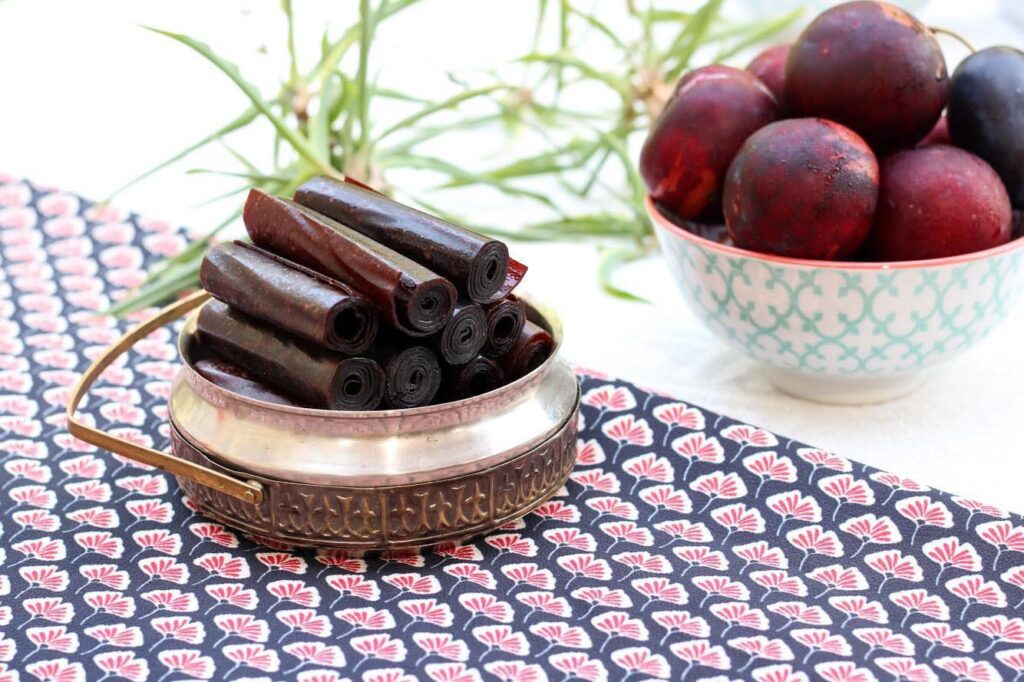 “We plan to expand the range of tklapi in about a week – we will also start producing it from kiwi and from a mixture of carrots and apples,” Vakhtang Kajrishvili told EastFruit.

All Badagi and Badagi+ products are sold only on the local market. According to Vakhtang Kajrishvili, the issue of exports is not yet discussed, although it is being considered in the future – first, they need to satisfy the domestic demand. Thus, plans for the near future include a further increase in the range of both churchkhela and tklapi. The businessman plans to purchase several more units for the tklapi production line. 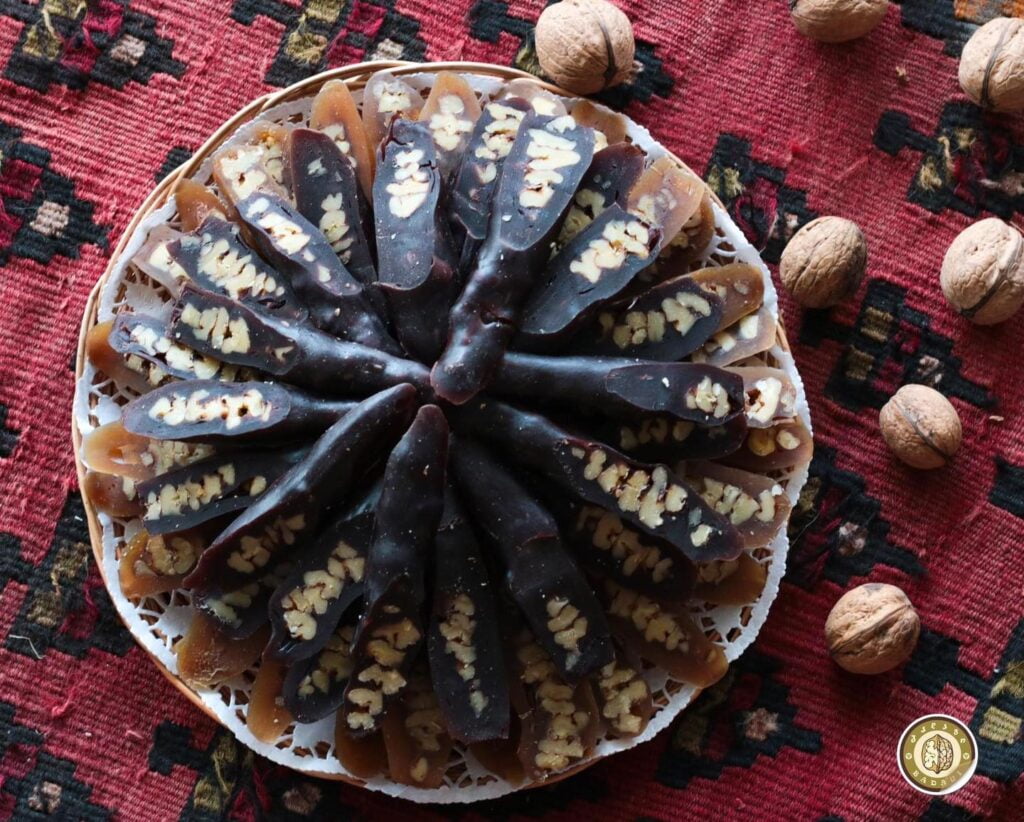